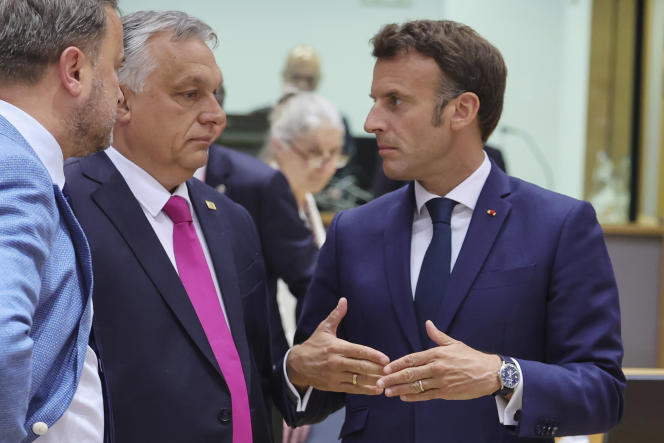 The announced objective is to cut off the financing of the war waged by Moscow in Ukraine. The Heads of State and Government of the European Union (EU), meeting at a summit in Brussels, agreed on Monday evening May 30 on a gradual embargo of two-thirds of European purchases of Russian oil.

This compromise concerns oil transported by ship. Berlin and Warsaw having pledged to stop their imports through the Druzhba pipeline, in total 90% of Russian oil exports to the EU will be stopped by the end of the year, affirms the president of European Commission Ursula von der Leyen and French President Emmanuel Macron.

“Russia makes the choice to continue its war in Ukraine. As Europeans, united and in solidarity with the Ukrainian people, we are taking new sanctions this evening,” tweeted Mr. Macron, whose country holds the presidency of the Council of the EU.

“This will cut off a huge source of funding for the Russian war machine” and put “maximum pressure” on Moscow to end the war, European Council President Charles Michel tweeted.

Earlier in the day, Ukrainian President Volodymyr Zelensky called on EU leaders by videoconference to agree to quickly adopt the sixth package of sanctions against Moscow, of which the oil embargo was the most sensitive point. “The quarrels in Europe must stop (…), Europe must show its strength. Because Russia only understands the argument of force,” the Ukrainian leader said.

A temporary exemption has been provided by the EU for oil transported by pipeline, in order to lift the veto of Budapest. The extension of the embargo to pipeline deliveries will then be discussed “as soon as possible”.

Budapest had conditioned its green light on guarantees on its supply. Arriving at the summit, Hungarian Prime Minister Viktor Orban had demanded insurance in the event of a cut in the Druzhba pipeline which supplies his country via Ukraine.

Hungary, a landlocked country without access to the sea, depends for 65% of its consumption on oil transported by Druzhba. It had opposed the initial proposal for an embargo, unless it benefited from a period of at least four years and around 800 million euros in European funding to adapt its refineries. She also demanded to be able to be supplied with Russian oil by sea if the arrival by pipeline were to be stopped. “That’s the guarantee we need,” Orban said.

Unanimity is required for the adoption of sanctions. The political green light from the leaders must still give rise to an agreement ratified at the level of the ambassadors of the Twenty-Seven to settle the details before the measures come into force. Negotiations will then take place to also stop imports via Druzhba (a third of European supplies), whose northern branch serves Germany, Austria and Poland, and the southern branch serves Hungary, the Czech Republic and Slovakia.

For Moscow, however, it is easier to find other buyers for its exports by tankers than by pipeline. However, member states fear that the exemption of supply by pipeline will distort the conditions of competition for oil purchases.

Under negotiation for a month, the new sanctions package also provides for an expansion of the EU blacklist to around 60 personalities, including the head of the Russian Orthodox Church, Patriarch Kirill. It includes the exclusion of three Russian banks from the Swift international financial system, including Sberbank, the country’s main institution. So far, seven Russian institutions have been deprived of access to Swift, a secure messaging platform allowing crucial operations such as funds transfer orders between banks.

The leaders also approved the granting of 9 billion euros to the Ukrainian government to cover its immediate cash needs to run its economy. Kyiv has calculated its needs at $5 billion per month. European funding will take the form of “long-maturity loans” with subsidized interest rates, a European source said.

The two-day summit is also due to address on Tuesday the consequences of the war-related food crisis and the continent’s energy transformation to do without Russian gas.