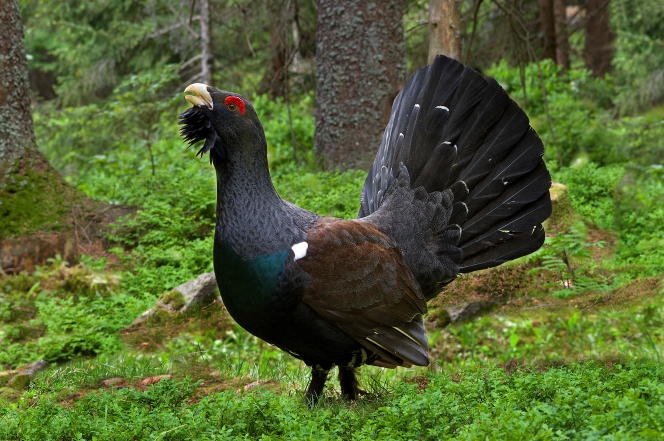 Black plumage, red-rimmed eyes, and a white-spotted fan tail. The Pyrenean capercaillie can no longer be hunted in metropolitan France, at least until 2027. The Council of State validated, on Wednesday June 1, a five-year moratorium on the hunting of the largest land bird in Europe . “Finally, a little respite for this species in great difficulty,” said Thierry de Noblens, former president of France Nature Environnement (FNE) Midi-Pyrénées, one of the seven associations behind the procedure.

A year ago, they seized the highest administrative court, after the refusal of the Ministry of Ecological Transition to ban the hunting of the bird. In its decision, the Council of State considered that “the hunting of capercaillie is not compatible with the maintenance of the species and that it is necessary to suspend it throughout the metropolitan territory of France for a sufficient duration to allow the recovery of the species in the various sites of its range”.

Because, since the 1960s, the Pyrenean capercaillie has become increasingly rare on the edge of the forest, in the blueberry bushes that it appreciates so much. It is now classified as “Vulnerable” by the International Union for Conservation of Nature in its French Red List of Threatened Species. According to estimates, the numbers of the species have been divided by five in sixty years and continue to decline by 2.1% each year. Four thousand specimens were thus identified in 2021 in the Pyrenean massif, compared to nine thousand in the 1960s.

However, the species has been protected by a European directive since 1979. If the text does not prohibit the hunting of the Pyrenean capercaillie, it regulates it. “The capercaillie can be the object of hunting, but there is one condition: not to compromise the conservation efforts of the species”, details Hervé Hourcade, lawyer for FNE Midi-Pyrénées. The departmental prefects can thus set a maximum number of capercaillie that hunters are authorized to take each year, depending on the demographic development of the species.

This method is also defended by the Ministry of Ecological Transition under the name of “adaptive management”. In the same way, this strategy consists of annually evaluating the numbers of a species in order to set the harvest ceilings. In April 2021, Bérangère Abba, then Secretary of State for Biodiversity, refused to ban capercaillie hunting in favor of “the implementation of adaptive management” for this species.

A compromise that environmental defense associations consider insufficient. Every year, since 2011, they have challenged the prefectural decrees authorizing this hunt in the Hautes-Pyrénées, Ariège and Haute-Garonne. Justice has given them reason fifty-five times, by suspending or canceling these authorizations. In 2018, the Council of State even canceled a hunting decree authorizing the taking of a single bird in the Pyrénées-Orientales.

For their part, the hunting federations contest these successive bans. “It’s dogmatism, considers Sébastien Dejean, director of the Departmental Federation of Hunters of Haute-Garonne. From the moment that the associations want this bird to be protected, they do not want to sit around a table to develop reasoned sampling strategies. According to him, banning capercaillie hunting would even be harmful to the species. “Hunters participate in counts every year,” he recalls. On the day when hunting is prohibited, they may no longer count the capercaillies and there would then be very little data on the species. »

What will happen to the Pyrenean capercaillie now? It is not certain that its sustainability will be ensured with the ban on hunting, as this is not the only threat to the species. Foremost among these is the intensification of tourist activities, especially in winter. “The capercaillie then needs absolute tranquility, because it feeds on pine needles which it has a lot of trouble digesting,” says Thierry de Noblens. However, when walkers cross “capercaillie areas”, the bird flies off to find peace and eventually dies of exhaustion. “When he sees a human approaching a hundred meters away, he flies away, for he is afraid of being chased away. If we completely ban hunting, the capercaillie would get used to not being afraid anymore,” says Thierry de Noblens.

Beyond these pressures exerted locally on the species, the capercaillie is also threatened by global warming. “The Pyrenean capercaillie appreciates rather low mountain temperatures,” explains Loïc Obled, Deputy Director General of the French Office for Biodiversity. So, with the increase in temperatures, it goes up to find colder areas. The risk is to lose the ability of populations to mix with each other because they will no longer be in the same plain, but on different massifs. The defenders of the capercaillie of the Pyrenees will therefore have to redouble their efforts in the coming years, to hope to save their protege.