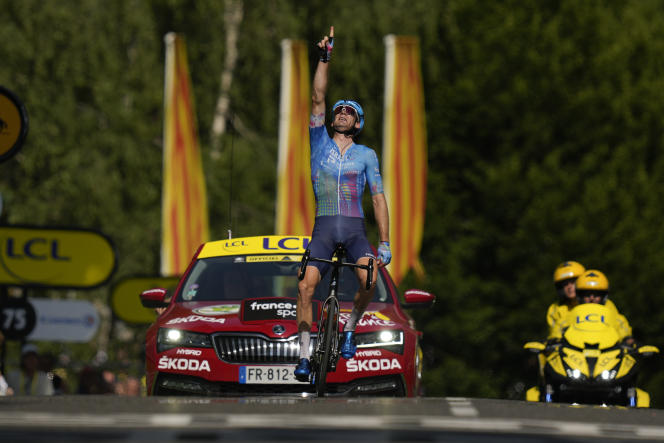 The weather was not really Quebec, but the Belle Province is likely to remember this hot Tuesday, July 19, 2022 in Foix (Ariège) for a long time. Hugo Houle won the 16th stage of a Tour de France crushed by heat enough to make you want to throw yourself headfirst into the Ariège river. The Israel-Premier Tech rider brings Canada his second victory on the Grande Boucle, after that of the pioneer Steve Bauer in Machecoul (Loire-Atlantique), in 1988.

On arrival, his compatriot and teammate Michael Woods was so moved that he forgot the prize list of his friend, twice Canadian champion in the individual time trial (in 2015 and 2021). “Hugo was so happy, it’s his first among the professionals”, slipped the 3rd of the day. We see the idea. At 31, Houle had never lifted his arms in a road race and he chose his day and his race well.

Yet when he went on a breakaway with 28 other riders, no one would have bet a Canadian dollar on him. The Quebec rider arrived a few seconds ahead of the Mur de Péguère, the last difficulty of the day about thirty kilometers from the finish, but his chances seemed slim. Hugo Houle nevertheless achieved the feat of resisting the dizzying percentages of this climb and the return of the best climbers to dive towards Foix and the greatest happiness of his career.

“Originally that was all for Michael Woods, today,” says Rik Verbrugghe, the Israeli team manager. “It’s often the second-row riders who have the most luck in a breakaway like the one we had. She was so tall that we looked at each other. They are more opportunistic,” admits Michael Woods, far from unhappy to have sacrificed his chances. “We’ve done well as a team since the start of this Tour, with victory for Simon Clarke [at Arenberg], 3rd place for Froome [at Alpe d’Huez] and Hugo who was already third last week [at Saint-Etienne]… It’s the icing on the cake,” continues the Toronto native.

The victory of the Canadian also had the gift of giving a smile to Julien Jurdie, the sports director of an AG2R Citroën team yet very badly embarked after two new withdrawals in its ranks due to Covid and now reduced to three riders. “We discovered it and launched it at home on the World Tour,” said a genuinely emotional Jurdie when discussing his “Hugo.” “When he was with me, he was more into the Flandrian classics, he wasn’t so sharp,” he says with a burst of laughter. He deserves it so much. He is a warm boy with a difficult history. »

Terrible even. His brother Pierrick died in 2012, run over by a driver who fled. Hugo Houle will also tell, on the verge of tears, that he had promised himself to win a race that he and his brother were watching together. “I’m sure my brother helped me win,” said the one whose raised finger as he crossed the finish line was an obvious message.

Out of Canadian annals, today’s stage proved that Tadej Pogacar (UAE-Emirates) was a man of his word. “I have to take every chance on every climb, I have to try to attack, go as hard as possible on the hills and try to save time every day,” the Slovenian warned on Monday during the day of rest.

This first act of the Pyrenean Trinity on the menu of this Tour, 178.5 kilometers between Carcassonne (Aude) and Foix (Ariège), was not the most complicated to negotiate. However, he offered great opportunities to reduce this gap of 2 minutes 22 a little, this small gap between him and the yellow jersey, Jonas Vingegaard (Jumbo-Visma).

So “Pogi” tried. Thrice. Two a few kilometers from the top of the port of Lers, the penultimate difficulty of the day. The third at the beginning of the descent. Without ever managing to get rid of the Dane, so in his wheel that we sometimes came to no longer see him. In the Wall of Péguère, Pogacar put the faithful Rafal Majka to the board, but when the Pole took his shoes off, his leader must have thought that it might not be the day to overthrow the Tour.

First Frenchman in the general classification this morning (4th at 3 minutes 01), Romain Bardet, he lived “one of the worst days for a long time”. Without really being able to find an explanation. Adrift on the last climb, the DSM team rider lost 3 minutes 30 overall and is now in 9th place.

But the biggest ordeal of the day was that of Marc Soler. The UAE-Emirates Spaniard, who suffered from stomach aches, vomiting and frequent visits to the medical vehicle, arrived alone 57 minutes and 6 seconds after Hugo Houle. Out of time. Tadej Pogacar loses a new teammate (the third) in his quest for yellow.

Pierre Salvadori, filmmaker: “I was a very lonely, shy child, and...