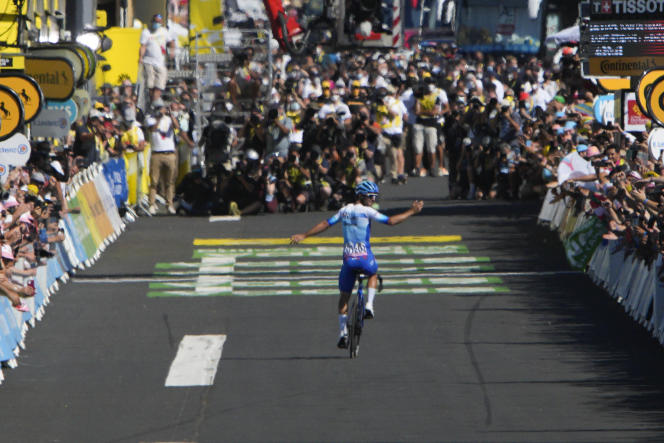 “Jaja, you are the king of the world. “The spectators installed, Saturday, July 16, along the coast of the Croix-Neuve, will be able to recycle their banner for the next passage of the Tour de France by the aerodrome of Mende (Lozère). Memorable winner on July 14, 1995, Laurent Jalabert is still waiting for his French successor on this 3 kilometer (10.2%) climb which now bears his name.

But it’s a bit of all French cycling that is in the waiting room. No Habs have, in fact, raised their arms on the Tour since Julian Alaphilippe, at the opening of the last edition, in Landerneau. Thirty-four blank stages, and the possibilities are now dwindling. Thibaut Pinot had a good profile as a savior of the nation, but the Groupama-FDJ climber was too short (3rd) to follow the winner of the day, the Australian Michael Matthews (BikeExchange).

In a breakaway of twenty-three riders, Pinot and his compatriots Benoît Cosnefroy (AG2R Citroën) and Franck Bonnamour (B

Matthews was tired of places of honor

He is not the only one to make this observation. “When you see the level on this type of stage, there is not too much room for riders like me, but it’s not over yet”, slips, for his part, Franck Bonnamour. On the Tour, the stages have become little classics.

Saint-Etienne crowned a former world champion on Friday (Mads Pedersen), Mende on Saturday devotes a runner with now thirty-nine career successes. Not really small game. “All the stages are good to take on the Tour, continues Bonnamour. We end up with Matthews. I saw that he had the right pedal stroke, he came out when everyone wanted to breathe and he hurt a lot. »

Considered the best climber among sprinters, Michael Matthews had been chomping at the bit for five years, stacking podiums in the Grand Tour without ever reaching the top step. Since the start of this 109th Grande Boucle, the 31-year-old Australian had even added two new runner-up places, in Longwy (Meurthe-et-Moselle) and Lausanne (Switzerland), beaten by these gluttons of Tadej Pogacar and Wout van Aert .

So, this Saturday, the Slovenian’s great friend fought tirelessly to take the right breakaway, then try his luck alone 50 kilometers from the finish. After all, he pushes versatility to shine in time trials. Caught up, a short time later, by Felix Grossschartner (Bora-Hansgrohe), Luis Leon Sanchez (Bahrain-Victorious) and Andreas Kron (Lotto-Soudal), he set off again alone in the Côte de la Croix-Neuve before seeing the return of an Italian racing car, Alberto Bettiol. But Matthews did not give up and decided to punish the EF Education First rider in the last hectometres of the climb.

“I knew waiting for the last bump was not the right solution, everyone would have looked at Michael as the favorite, says Mathew Hayman, his sporting director within the Australian formation. But, when Bettiol came back on top of the final bump, it was really up to whoever would be mentally stronger. »

Saturday promised to be difficult, with its 3,400 meters of elevation gain and its 192.5 kilometer course conducive to attacks. Add to that the stifling heat: 35°C on the airfield tarmac and far too few shaded areas. The ideal recipe to surprise a contender for the general classification on a bad day.

Tadej Pogacar, he had planned the coup. Tired of wearing the white jersey of the best young rider, the double winner of the Tour has decided to recover his yellow tunic from the shoulders of Jonas Vingegaard. When he starts his acceleration in the Côte de la Croix-Neuve, Geraint Thomas and Adam Yates (Ineos Grenadiers), 3rd and 5th overall, are left behind, only the Dane from Jumbo-Visma can follow him.

“It went up very quickly at the foot of the Croix-Neuve, it was really very impressive. I had trouble finding my cruising speed, my legs were burning, says Romain Bardet, still 4th overall, but now 3 minutes 01 from Vingegaard and 39 seconds from Pogacar. Every day there is a fight in general to recover a few seconds, it will be played on the mind in the third week. “A bit like for two weeks and this departure from Copenhagen.