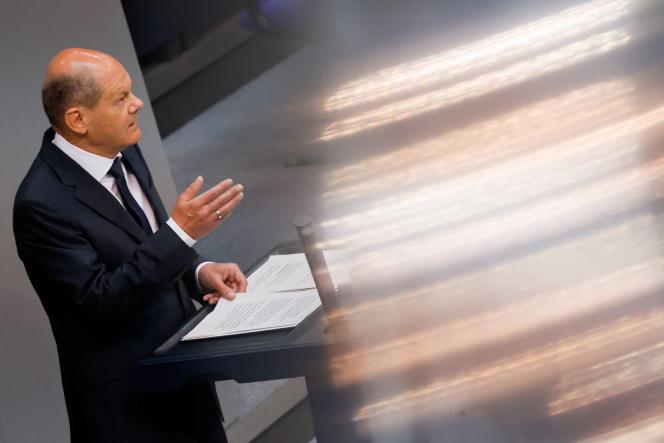 For weapons, yes. For a quick membership, it’s no. Berlin and Paris have made this known to Ukraine. Which irritates Dmytro Kuleba. The head of Ukrainian diplomacy denounced, Thursday, May 19, the treatment of Ukraine’s application for membership of the European Union.

“The strategic ambiguity about Ukraine’s European perspective practiced by some EU capitals over the past few years has failed and must end,” he tweeted, citing “second-class treatment.” which “hurts the Ukrainians”.

German Chancellor Olaf Scholz had said minutes earlier that he was not in favor of giving Ukraine a “shortcut” to EU membership. “The fact that there are no shortcuts on [Ukraine’s] path to EU membership is an imperative of fairness to the six Western Balkan countries,” who have long wanted join the European bloc, Scholz said in a speech to Bundestag MPs.

French President, “Emmanuel Macron, is right to point out that the accession process is not a matter of a few months or a few years,” he added. “That’s why we currently want to focus on rapid and pragmatic support for Ukraine” subject to the Russian offensive, he repeated before the EU-Western Balkans summit on Monday in Brussels.

Ukraine, Georgia and Moldova have recently applied for candidate status, while six of the thirteen Balkan countries – Serbia, Kosovo, Albania, North Macedonia, Montenegro and Bosnia – aspire to join the EU but the process of enlargement has been blocked for years.

In his speech on the occasion of Europe Day, May 9, Mr. Macron declared that Ukraine, invaded by Russia, was already “a heart member of our union”. But the process of joining the EU, to which kyiv aspires, “would take several years, in fact several decades”, he had estimated, while proposing, in parallel, the creation of a “new European organization”.

A point of view that had surprised kyiv, the Ukrainian president, Volodymyr Zelensky, recalling during an exchange with French students on May 18 that “we cannot be kept at a distance”. “It’s like a table where the whole family is gathered, and we invited you, but we didn’t put you in a chair. I think it’s unfair,” he said. “It is very important for us to reserve this place [in the EU] for Ukraine,” added Mr. Kuleba the next day.

Restaurant: in Biarritz, a luminous furrow

“The lukewarm reaction of the West to the death of Shireen Abu Akleh does not surprise me. But it upsets me”

News Editor - May 19, 2022 0
EDF announced on Thursday that the construction site for its new generation nuclear reactors (EPR) at Hinkley Point in England would be delayed by...

Roland-Garros: Djokovic, Nadal and Alcaraz, the three favorites, in the same...

“The Abominable Mystery of Flowers”, on France 5: empresses of the...