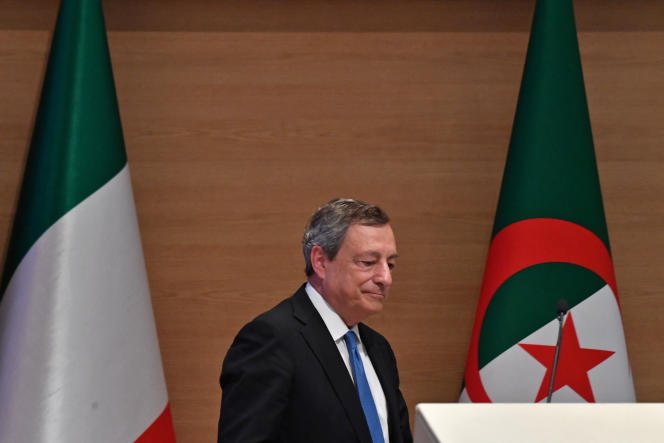 Italian Prime Minister Mario Draghi was received Monday, July 18 in Algeria by President Abdelmadjid Tebboune, with whom he co-chaired the fourth Algerian-Italian summit. MM. Tebboune and Draghi signed fifteen memoranda of understanding and agreements concerning the supply of Algerian gas to Rome, but also justice, micro-enterprises and start-ups, industrial cooperation and sustainable development.

Algeria, which has privileged relations with Italy, “has become in recent months its first gas supplier” after being overtaken for a long time by Russia, from which came 45% of the peninsula’s gas imports, said Mr. Draghi in front of the media, alongside Mr. Tebboune. “The signed agreement on energy cooperation demonstrates our determination to do even more in this area,” he said later at a bilateral economic forum.

Several countries have looked to Algeria to reduce their dependence on Russia since it invaded Ukraine in late February. In front of the media, Mr. Tebboune announced the signing on Tuesday of “an important agreement, amounting to 4 billion dollars [3.9 billion euros]”, between the American, Italian and French groups Occidental Petroleum, Eni and Total, “which will supply Italy with significant quantities of additional gas”. This contract will make it possible to “develop a deposit located in the perimeter of Berkine [in the Sahara], which should produce more than a billion barrels” of hydrocarbons, a government source told AFP.

The Eni group, present in Algeria since 1981, manages with the Algerian hydrocarbon giant Sonatrach the TransMed gas pipeline, which connects the country to Italy via Tunisia. It can transport up to 32 billion cubic meters of gas per year and, until recently, Algeria passed through it 22 billion cubic meters per year, which leaves a margin of 10 billion, according to expert Abdelmajid Attar, former Algerian energy minister.

The agreement for an increase in volumes delivered to Italy had been announced by Mr. Draghi during a first visit to Algiers in April, but no figures had been communicated. Eni had only mentioned the use of the “available transport capacities of the [Transmed] gas pipeline to ensure greater flexibility in energy supply and to gradually supply increasing volumes of gas from 2022 [in order to arrive] at 9 billion [additional] cubic meters of gas per year in 2023-2024”. The gas contract between the two countries was renewed in May 2019 for a period of eight years, until 2027, in addition to two additional optional years.

Between Algeria and Italy, trade exceeded $4.3 billion in the first five months of 2022, Algerian Prime Minister Aïmene Benabderrahmane said at the opening of the bilateral economic forum. “Algeria is Italy’s largest trading partner for the African and Middle Eastern regions,” he said, recalling that last year trade reached $8.5 billion. , “an amount set to increase this year”. The head of Italian diplomacy, Luigi Di Maio, hoped that “the areas where our countries collaborate [could] further expand and diversify”, welcoming Algerian commitments to “improve the business climate” for investors.