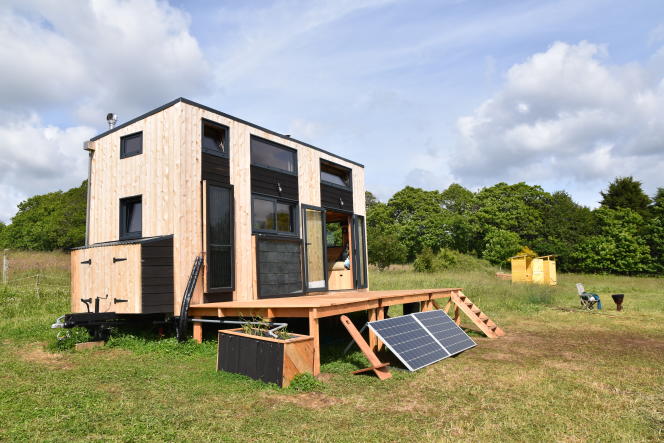 It doesn’t take much for them to be happy, as long as they have their self-contained playhouse. In 2019, Pierre-Alain Lévêque and Clément Chabot set themselves a challenge: to live for ten months in a tiny house of fourteen square meters, which is not connected to any water or electricity network, in Concarneau (Finistère) . To live in a more sustainable and independent way, these two engineers have implemented a dozen inexpensive ecological technologies. Their approach has a name: low-tech, “low technology” in French.

In opposition to high-tech, this concept advocates adapting our use of technology according to our needs. The goal: to achieve a leaner, less energy-intensive lifestyle. But beware, “the low-tech approach is not a return to the candle!” laughs Pierre-Alain Lévêque. It simply consists in asking ourselves why we need technology, and what is the right level according to our uses. »

At Pierre-Alain Lévêque and Clément Chabot, technology is not really synonymous with state-of-the-art smartphones, but rather with a return to basics. Hot air sensor, pantry, dry toilets… “We estimate that all these techniques have allowed us to have a carbon impact about seventy times less than an average French household”, continues Pierre-Alain Lévêque. Moreover, the tiny house provides them with the necessary comfort: two mezzanines, an equipped kitchen, a lounge area, a space for the shower and a terrace.

However, nothing predestined these two trained engineers for this metamorphosis. After doing civic service in Bangladesh in 2012, Pierre-Alain Lévêque realized that it was possible to live with less technology. “I thought maybe there was a way to highlight a different world than the one that sends us into the wall,” he recalls. This is followed by a world tour of low-tech initiatives aboard the catamaran Le Nomade des mers, then a tour of France on the same principle. Quickly, he wants to put into practice the solutions he discovers and “become a low-tech guinea pig”. He then embarked on the construction of an autonomous tiny house with one of his classmates, Clément Chabot.

The process begins, before the construction of the house, with the assessment of water and electricity needs. “We have reduced our water consumption to 30 liters per day and per person, where the French average is 150 liters”, relates Pierre-Alain Lévêque. To do this, all you have to do is install dry toilets, which reduce water consumption by 20%, share washing machines with friends… and be faster in the shower! To meet the remaining needs, the rainwater that falls on the roof is collected and filtered by a gutter, connected to a 250-litre water tank. “Fortunately for us, Concarneau often sees clouds passing by! “, underline the two acolytes.

The other concern is heating. It represents nearly 28% of the electricity consumption of an average dwelling in France, according to the 2021 report of the Ecological Transition Agency (Ademe). In the tiny house heated to nineteen degrees, thermal insulation initially significantly reduces consumption. “When we needed extra heat, there was a solar heating system,” explains Clément Chabot. On the southern facade, the sunniest, a black wall captures the heat behind a window and diffuses it to the entire building. For the coldest winter days, a wood stove completes the whole.

But the most effective low-tech is certainly the simplest: the pantry, placed on the north facade. “We don’t realize it, but a lot of food can be kept for a very long time, and sometimes better, outside of a refrigerator”, advocates Clément Chabot. So, in the tiny house, the refrigerator always remains unplugged, except for the summer period. “It’s a welcome dietary safeguard!” It prevents us from buying processed foods, which are often harmful to our health and the environment, because they don’t keep well without a fridge,” he continues.

“A sense of freedom”

The two acolytes live today in classic habitats, but have installed their favorite low-tech, such as the pantry or the dry toilets. More than two years after the end of the experience, Pierre-Alain Lévêque and Clément Chabot keep an unfailing memory of it. “It allowed me to go from material comfort to immense mental comfort, underlines the first. Living independently creates a feeling of satisfaction, but also of freedom, because we only depend on local elements. “Material, mental, but also financial comfort. An investment of 3,500 euros made it possible to make the tiny house autonomous then, “our expenses amounted to 150 euros over the whole year”, says Pierre-Alain Lévêque.

So how do you get started on your own scale? “You have to take small steps,” advises Clément Chabot. The best way is to tell yourself that for a month, you can try new habits: unplugging the fridge, or going on a cycling holiday! For Pierre-Alain Lévêque, the most important remains the estimation of our individual needs: “When we think low-tech, we think technology, but the first step is to assess your real needs, and find a way to meet them. satisfy as economically as possible. »

His association, the Low-Tech Lab, will organize a festival in Concarneau from June 25 to July 3. The event will celebrate the return of the catamaran Le Nomade des mers, which has been pursuing its low-tech initiatives around the world for six years.