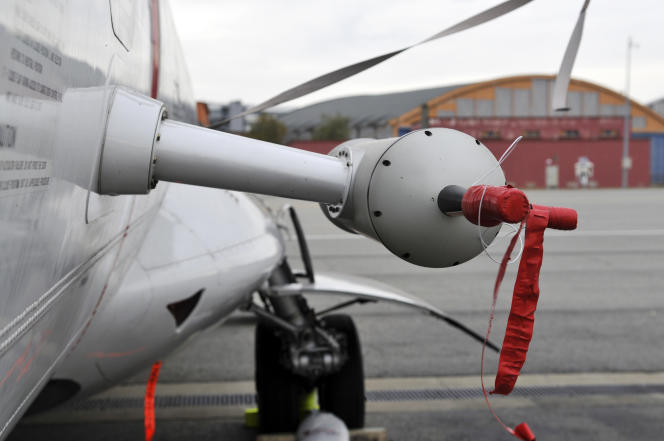 In the laboratory of the Across project (Atmospheric chemistry of suburban forests), researchers are put to the test. They can be shaken, their machines are hot and noisy. But above all, they have to work at an altitude of 300 meters. They operate inside an airplane, a flying laboratory.

The machine is an ATR42 completely modified to carry a range of scientific instruments. It belongs to the French Instrumented Aircraft Service for Environmental Research (Safire), a public research infrastructure that brings together Météo France, CNRS and CNES. As part of the Across project, around fifteen flights have been planned around Paris during the months of June and July. They aim to better understand local pollution: the composition of pollutants, how they form, their transformations when they disperse, etc.

“Large urban agglomerations like Paris are often surrounded by vegetated areas,” notes Paola Formenti (CNRS), one of the project’s scientific leaders. A plume of pollution then surrounds the cities and diffuses into nature. Urban pollutants, in the form of gases or particles, mix with compounds emitted by forests. However, explains the researcher, we still know very little about the result of these interactions. “We want to know how these mixtures change the quantities and properties of pollutants, for example modify their effects on the climate,” says Vincent Michoud, teacher-researcher at the Interuniversity Laboratory of Atmospheric Systems (LISA) and member of the project.

The researchers defined five flight paths, each following the pollution plume from its formation to its dilution in forest areas on the outskirts of Paris. These journeys can go up to 200 kilometers around the city, from Cergy-Pontoise aerodrome. The day before each departure, one of the routes is chosen according to the weather forecast.

In flight, a sampling vein under the aircraft routes the air inside continuously to the various analysis instruments. Eight engineers and scientists on board evaluate the data. A mass spectrometer, for example, allows them to distinguish compounds according to their molecular family. Other instruments all around the aircraft provide information on particle size and weather conditions, among other things.

Among the compounds thus observed: soot carbon emitted by vehicles, sulphates from thermal power plants, desert dust transported from northern Africa and volatile organic compounds from vegetation. But, before drawing a conclusion on the composition of the pollution, it will require in-depth analyzes of the data.

The last major campaign to study air pollution from Paris was the Megapoli project in 2009. “The technology has evolved a lot since then,” notes Paola Formenti. We are now able to detect much more subtle pollutants, and we can detect them in greater numbers. »

Particular attention is paid to the hygroscopicity of particles in the air, called “aerosol”. This property assesses their ability to capture water vapor to eventually form clouds. “The whole issue of global warming is intimately linked to clouds and, if we want to better understand clouds, we are going to have to better understand aerosols”, argues the American researcher, Christopher Cantrell (LISA), who leads the project.

Aerosols, whether of natural or anthropogenic origin, are generally produced on the ground and lifted by the wind. “By carrying out a measurement campaign by plane, we will be able to explore a large area and go and measure directly where the aerosols are transformed during the day,” explains Thierry Bourial, research engineer at Météo France. At the same time, collection stations located at different distances from Paris make it possible to compare aerial and ground data.

With the data collected, the researchers wish to refine the models for predicting air quality and climate change. “To know what types of political actions are the most effective in reducing pollution, you need to have robust and precise models”, underlines teacher-researcher Vincent Michoud.

A better knowledge of the composition of pollution would also allow a better understanding of its effects on human health, according to the researchers. More and more studies establish a link between pollution and diseases not only respiratory, but also cardiovascular.

After three weeks of mission, the Project Across flights will end on July 7th. In addition to being analyzed by the various research units affiliated with the project, the data will be made public. And, for Paola Formenti, this will only be the beginning of the adventure. “We have a unique dataset that will give us food for thought for several years,” she enthuses.