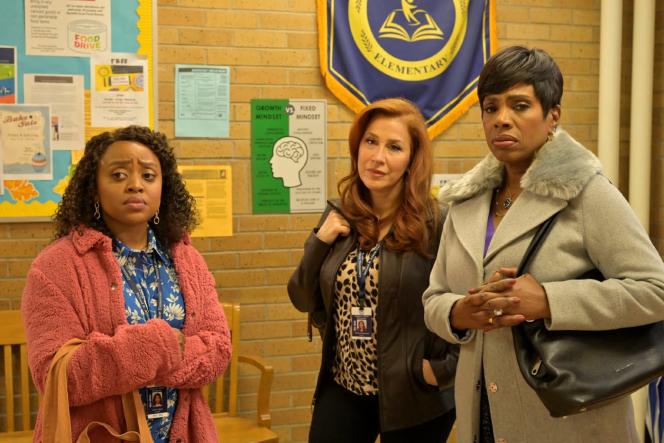 Ever since The Office proved that out of the dullest of open spaces come comedy, the mockumentary format has been emulated on the small screen. Under the leadership of actress Quinta Brunson, also creator of the series, Abbott Elementary takes the codes and applies them to a relatively virgin ground: an elementary school located in a predominantly black neighborhood of Philadelphia.

Quinta Brunson plays Janine, an idealistic teacher with overflowing energy and determined, at the level of her CE1 class, to pull the school system out of gloom. Under the fictitious eye of a team that has come to film a documentary on the lack of resources in primary school, Janine and her colleagues show the parodic daily life of an establishment welcoming middle-class children, with its broken toilets and his teachers in lack of recognition.

The more the reality depicted by Abbot Elementary is depressing – especially since many viewers will relate to it – the more the series takes the side of laughing at it, as if to offer a comic outlet for a profession exhausted by budgetary arbitrations, the waltz of programs, painful parents and two years of Covid, even if the pandemic is not directly mentioned in this first season. And while we laugh a lot at the expense of the characters of Abbott Elementary, we can’t help but also feel immense compassion for these people who keep a broken system afloat.

The school is certainly tired, but Janine is full of energy and willpower despite her small size – which makes it difficult for her to dominate her class. A young teacher, this former top of the class believes in the power of the institution and strives to move its lines, while happily allowing herself to be walked on by her students and her fiancé.

Quinta Brunson, who made a name for herself in a short format on Instagram, delivers a delicious interpretation of this character who is both fragile and confident. She has the elegance to leave beautiful pieces to her playing partners, who portray a gallery of colorful characters, from the young white teacher in search of credibility to the narcissistic perverse director.

The dry humor of Abbott Elementary unfolds over thirteen rhythmic and intelligently written episodes, which revolve, most often, around themes rooted in current events. Between a program for gifted children and viral videos to finance back-to-school supplies, the series questions with devastating humor what public schools can expect from the state, and what they are still able to do. offer to his students.