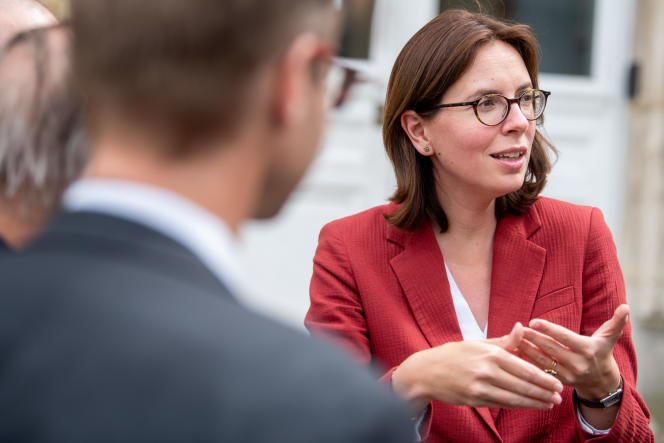 Amélie de Montchalin, Minister for Ecological Transition and Territorial Cohesion in the government of Elisabeth Borne, has succeeded, according to the first Ipsos-Sopra-Steria estimates for France Télévisions, Radio France, France 24-RFI-MCD and LCP-National Assembly, to qualify for the second round of legislative elections. In the first round, Sunday June 12, she totaled 30.4% of the vote, far behind Jérôme Guedj (40.4%), candidate of the New Popular Ecological and Social Union (Nupes) in the 6th district of Essonne , in which Jean-Luc Mélenchon had beaten Emmanuel Macron in the first round of the presidential election, with 30.7% of the vote.

After succeeding Nathalie Loiseau on March 31, 2019, as Secretary of State for European Affairs, Amélie de Montchalin was appointed Minister of Transformation and Public Service in July 2020 in the government of Jean Castex. She became Minister of Ecological Transition and Territorial Cohesion, a position of responsibility, on Friday May 20, 2022, in the government of Elisabeth Borne.

After working on the design of Alain Juppé’s economic program in the right-wing primary in 2016, she joined La République en Marche (LRM) the same year, before being elected under the LRM label in 2017, in the 6th constituency of Essonne, which she won without having previously held a political office. She quickly melts into her role, appearing as a “techno” figure, a fine connoisseur of economic issues. Without experience in ecology, this convinced liberal pleads for a form of “pragmatism” and for an “efficiency of public spending”.

At the start of her mandate, she was coordinator of the LRM group on the finance committee and became the first woman to hold such a position in the National Assembly. She supports the abolition of the wealth tax, believing that it was a brake on investment.

As Minister of Transformation and the Public Service, Ms. de Montchalin notably carried out the draft ordinance for the reform of the senior management of the public service, in 2021, which included the transformation of the National School of administration into a National Institute of Public Service in 2022, the abolition of many bodies of senior civil servants, and the creation of a single body, that of State administrators.

Promoted Minister of Ecological Transition in May 2022 by the new host of Matignon and the President of the Republic, she will have to win on Sunday June 19 if she wants to stay in place in this strategic position, because, as in 2017, the members of the government candidates to the deputation will have to resign in case of failure.