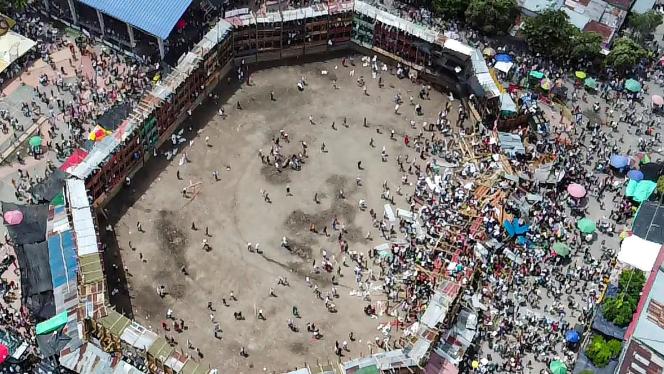 At least four people died and about 30 were seriously injured in the collapse of the stands of an arena on Sunday, June 26, in Espinal – a Colombian city of some 78,000 inhabitants located 150 kilometers southwest of Bogota – , local authorities said. “There are four people dead at the moment. Two women, an adult man and a minor,” said Jose Ricardo Orozco, governor of the department of Tolima, on local radio.

The accident took place during a local bullfighting show, a kind of popular festival during which the public descends into the arena to face oxen and small bulls. A whole section of the three-storey wooden bleachers, crowded with spectators, collapsed, throwing dozens of people to the ground, according to spectacular images taken by a drone and recovered by Agence France-Presse.

“About thirty people are seriously injured (…) this is a preliminary report, they are still transferring the injured,” added Governor Jose Ricardo Orozco.

“We’re still waiting to see how many people are under the rubble, we don’t know how many. As you can see in the videos, almost the whole wing was filled with people and it collapsed,” Major Luis Fernando Vélez, director of the Tolima Civil Protection Department, told the same radio station.

A well-established, but dangerous tradition

Another amateur video shows the public trying to escape the debris of wood and sheet metal while a bull continues to prowl the arena.

The accident happened at the Gilberto Charry bullring during the holiday weekend where the San Pedro fiestas, the most popular in the region, are celebrated. “We will request an investigation into the facts (…). Solidarity with the families of the victims,” Colombian President Ivan Duque said on Twitter – his successor, Gustavo Pedro, elected to lead the country on June 19, will be sworn in on August 7.

Governor Orozco warned that he would call for “the suspension of all these types of festivities”, claiming that these events “attack on the life” of animals and encourage “their mistreatment”. The day before, several people had been injured by bulls during this same party in Espinal.

New Colombian President Gustavo Petro has added his voice to that of the governor. “I ask the town halls not to authorize any more shows involving the death of people or animals”, he commented on Twitter, recalling in passing the death of hundreds of people in the collapse of another arena in the municipality of Sincelejo (north of the country) in 1980.

When he was mayor of Bogota (2012-2015), Gustavo Petro put an end to bullfighting at La Santamaría, the emblematic bullring of the capital. Colombian justice punishes the mistreatment of animals, but practices such as bullfighting and cockfighting still take place as cultural events.

In Ecuador, faced with indigenous protest, the president agrees to lower...

News Editor - June 27, 2022 0
Ecuadorian President Guillermo Lasso announced on Sunday June 26 a drop in fuel prices, in a proportion nevertheless lower than the demands of the...

At least four dead and dozens injured in the collapse of...