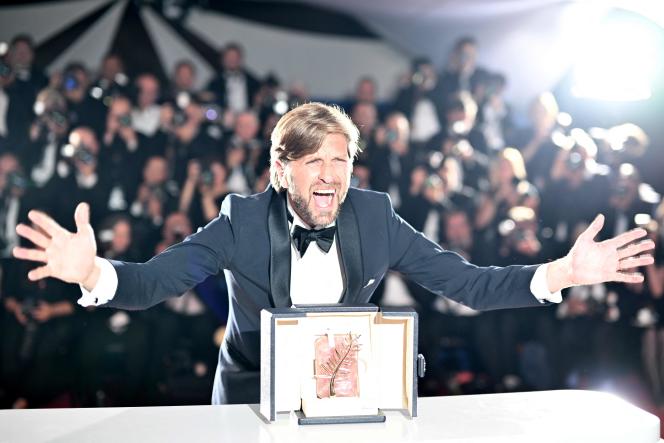 The 75th Cannes Film Festival has chosen the corrosive and political outburst of laughter by offering a second Palme d’Or to Ruben Östlund, for Triangle of sadness (Without filter, in French), his acid satire of the super-rich and class relations in Western societies.

This crossing of Titanic and La Grande Bouffe succeeds Titane by Frenchwoman Julia Ducournau, winner of the previous edition.

Five years after The Square, his feature film on the world of contemporary art which was in the same vein, the 48-year-old Swedish director has not calmed down. This time he denounces, through caricature and excess, the excesses of the society of appearance and capitalism. He joined the webbed doubles club, alongside the Dardenne brothers, Ken Loach and Michael Haneke.

“We had only one goal: to make a film that interests the public and makes them think by provoking,” said Ruben Östlund when receiving his award. “As in a conversation with friends, you can laugh when you talk about important topics, I think you can make entertaining movies by talking about serious topics,” he said at a press conference, after the winners .

Spectators will not soon forget the scene of general seasickness, with deluges of vomit and excrement, during dinner on a sinking boat, or the battle of quotes between the captain, communist, and a Russian oligarch . “The entire jury was extremely shocked by this film,” acknowledged jury president Vincent Lindon.

Wash away the “humiliations”

Beyond the Palme d’Or, the jury including Rebecca Hall (Vicky Cristina Barcelona), the Indian Deepika Padukone, and the directors Asghar Farhadi and Ladj Ly, gave its second most prestigious distinction (Grand Prix) tied with Frenchwoman Claire Denis, 76, (Stars at Noon) but above all with a young talent, Lukas Dhont, 31.

With Close, his second film, the Belgian sensitively tackles questions of identity and the weight of masculinity, and reveals an actor, Eden Dambrine, 15, on stage alongside him. The latter saw the interpretation prize escape him, in favor of the South Korean star Song Kang-ho, the father in Parasite, this time rewarded for The Good Stars of the Japanese Kore-eda.

On the women’s side, the jury distinguished a courageous journey marked by “humiliations”, that of the Iranian Zar Amir Ebrahimi, for her role as a journalist investigating the murders of prostitutes committed in the name of God, in the thriller The Nights of Mashhad .

“This film is about women, about their bodies. It’s a film full of hate, hands, feet, breasts, sex, everything that is impossible to show in Iran,” said the one who saw her career in Iran abruptly interrupted because of a sex scandal, which pushed her to leave her country for France.

Belgium in the foreground

Belgium is one of the winners of the Festival: in addition to Lukas Dhont, the Dardenne brothers, champions of social cinema, received a special prize for this 75th anniversary edition, for Tori and Lokita, a social drama about young exiles, and the couple Flemish Charlotte Vandermeersch and Felix van Groeningen (Les Huit Montagnes) receives the Jury Prize, tied with the UFO of the competition, EO (“Hi Han”), animalist manifesto on a donkey, directed by a figure of Polish cinema, Jerzy Skolimowski.

And if the war in Ukraine was not forgotten during this Festival, opened with a message of resistance addressed, from kyiv, by the Ukrainian president Zelensky, and which programmed several Ukrainian filmmakers, the Russian Kirill Serebrennikov left empty-handed . Having become the standard-bearer of Russian art in exile, the filmmaker breaking with the regime had for the first time been able to travel to the Croisette to personally defend one of his films in competition, Tchaikovsky’s Wife.

Out of competition, the Festival also wanted to make the public dream by inviting the mega star Tom Cruise, who came to present the new Top Gun, and the new darling of Hollywood, Austin Butler, in the role of Elvis Presley for the biopic event of the “King”. Two films on which the cinema industry is counting on to bring the crowds back to theaters, after two years of health crisis.

News Editor - May 29, 2022 0
The 75th Cannes Film Festival has chosen the corrosive and political outburst of laughter by offering a second Palme d'Or to Ruben Östlund, for...