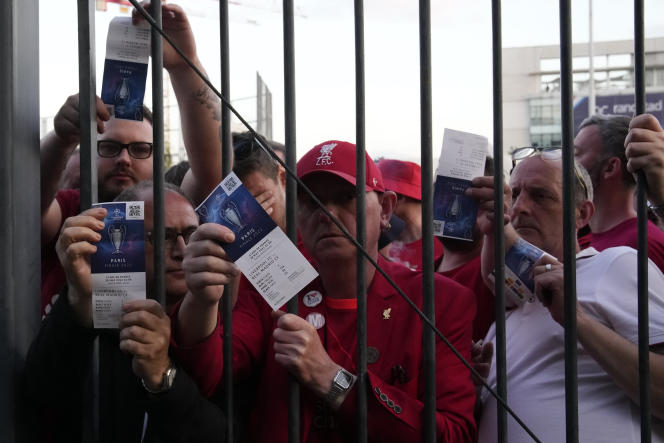 The organizers of the Champions League final, the police and local authorities will meet on Monday at 11 a.m. to “identify the malfunctions” and the problems of access for supporters on Saturday May 28 at the Stade de France, announced Sunday the Ministry of Sports and the Olympic Games.

“With the Minister of the Interior, we deplore the incidents that marred the evening of the Champions League on Saturday evening at the Stade de France and regret that some supporters with tickets were unable to attend the match”, indicated in a communicated the new Minister of Sports and the Olympic and Paralympic Games Amélie Oudéa-Castera.

“The priority now is to identify very precisely the dysfunctions with UEFA [the European Union of Football Associations], the French Football Federation, the Stade de France, the Paris Police Headquarters, the Seine-Saint Prefecture -Denis and the town hall of Saint-Denis in order to learn all the lessons to prevent such incidents from happening again for our future major international sporting events,” the statement continued.

Saturday, the kick-off of the final of the prestigious Champions League, between Real Madrid and Liverpool (1-0 victory for the Spanish club), was delayed by thirty-six minutes due to problems accessing the stadium English supporters. The pre-match was marked by chaotic scenes around the stadium, with no serious injuries.

Many critics in France and abroad

From 6:30 p.m., many ticket-holding fans were blocked around the stadium, before accessing the first security checkpoints. Around 8 p.m., tempers began to heat up, with a few dozen people not hesitating to climb the last access barriers inside the sports enclosure. The police intervened, dispersing the crowd and passing supporters with tickets, including families, with tear gas.

According to the European Football Union (UEFA), “thousands of spectators” showed up with “fake tickets that did not work”, creating “a crowd of spectators” in the queues.

As soon as the match ended on Saturday evening, the Minister of the Interior, Gérald Darmanin had pointed out the attitude of “thousands of British supporters without tickets or with fake tickets who forced their way in” at the Stade de France. “Attempts to intrude and defraud thousands of English supporters have complicated the work of stewards and police forces but will not tarnish this victory,” said Sports Minister Amélie Oudéa-Castéra.

From Saturday evening, numerous testimonies from journalists or English supporters on the spot, accompanied by photos and videos, undermined this version, pointing the finger at a deficient organization and an excessively aggressive attitude of the police.

British police from Merseyside-Liverpool at the stadium tweeted about “shocking circumstances” and defended the “exemplary” behavior of Reds fans during the game, “the worst” they say they have ever had to deal with in terms of organization. Also present at the stadium, Labor MP for West Liverpool, Ian Byrne, denounced “horrendous security” and a “life-threatening organisation”. “We were treated like animals. It was horrible,” he lamented on Sky Sports.

“We are extremely disappointed with the access issues and perimeter security breaches suffered by Liverpool supporters,” the English club said in a statement.

Critics have been numerous, in France and abroad, about the organization and management of this sporting event which served as a test for the Rugby World Cup, organized by France in 2023 and for the Olympic Games. of Paris, which will be held in 2024.