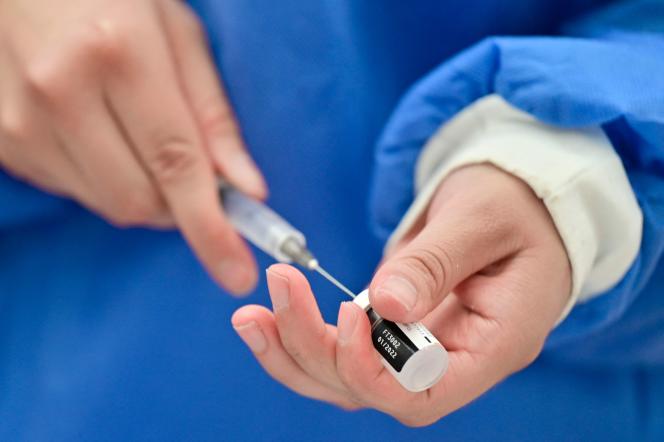 While cases of Covid-19 contamination are on the rise again in France – on Monday, with 17,601 cases recorded, there were 52% more than the previous week – the rate of vaccination reminders remains very low. Over the past seven days, an average of 6,921 booster injections have been performed daily, which corresponds to around 1% of the maximum frequency of the booster vaccination campaign, reached on December 20, 2021. Public Health France is also observing a 5.9% increase in emergency room visits due to the virus compared to the previous week.

This upsurge has prompted the government to recommend that the French take a first or second booster dose, depending on their vaccination schedule. “I am calling for people who have not used it to do so very quickly,” Health Minister Brigitte Bourguignon said Monday on RTL, citing more specifically the over 60s and the immunocompromised people.

If more than 83% of the eligible population is fully vaccinated – i.e. with two doses or one dose after infection with the virus – 62.95% have received a first booster dose, commonly called “third dose”. “. The “fourth dose”, which is, in fact, the second booster, is reserved for a part of the population.

Who is eligible for the 2nd reminder?

People “at risk” – i.e. over 60 and immunocompromised – and who have received a first booster dose are affected by the second booster.

As of January 6, an opinion from the vaccine strategy orientation council recommended that severely immunocompromised people, as well as their relatives, receive an additional dose.

On March 14, people over the age of 80 were, in turn, invited to perform an additional injection. Three weeks later, the booster dose was opened to those over 60, in response to the wave of the Omicron variant and the progressive weakening of the protection of the first doses.

The recall campaign got off to a very slow start and, according to the latest figures from the national health agency, dated June 20, 26.5% of people aged 60-79 and 30.1% of people aged 80 and over received their second booster dose. A coverage deemed “clearly insufficient” by the government.

People under 60 are not currently affected, but “we will probably get there”, replied Brigitte Bourguignon, Monday, about the generalization of this booster dose.

For people aged 80 and over, residents of residential facilities for dependent elderly people (Ehpad) and long-term care units (USLD), the second booster dose is possible three months after the last. The period is extended to six months for people aged 60 to 79.

With regard to severely immunocompromised people, “solid organ transplant recipients, recent bone marrow transplant recipients, dialysis patients, patients with autoimmune diseases on strong immunosuppressive therapy such as anti-CD20 or anti-metabolites”, as detailed the Ministry of Solidarity and Health, the booster injection can take place as early as three months after the first booster dose, and this, from the age of 12.

Is it still possible to receive a first booster dose?

Anyone over the age of 12 with a full vaccination schedule can still receive their first booster dose, as early as three months after the last injection or infection, for those over 18, and as early as six months, for 12-17 year olds.

When it was still required, conditioning the validity of the health pass, which had become a vaccination pass, with a booster dose had accelerated the recall campaign. The government now retains the possibility of renewing the obligation of the health pass at the borders after July 31, end of the state of health emergency.