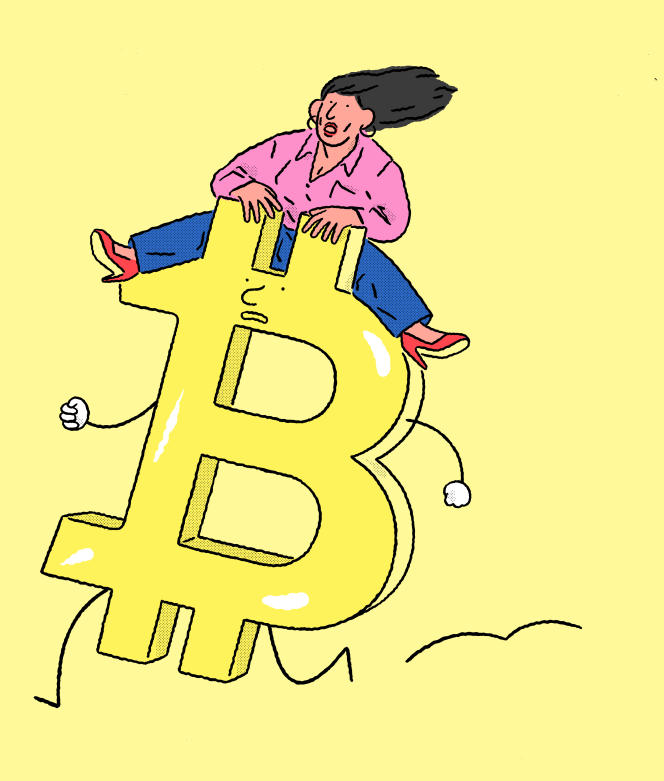 It’s not yet a tidal wave, but the phenomenon is far from being anecdotal: 8% of French people have already invested in crypto-assets, according to a February study carried out by the consulting firm KPMG for the Association for the development of digital assets (ADAN). “Cryptocurrencies have become an essential investment provided you limit your positions to between 3% and 5% of your financial assets,” says Karl Toussaint du Wast, wealth management advisor, co-founder of the Netinvestment investment solutions platform.

Better to have a strong heart, because the last few months have not been easy: bitcoin is evolving around 21,000 dollars (20,000 euros), a drop of 56% in six months. But the cryptocurrency star is still worth five times more than two years ago. Something to make savers dream, whose traditional financial products hardly bring in more than a few percent per year.

Bitcoin is a virtual currency created in 2009 by a certain Satoshi Nakamoto, whose true identity remains secret. Unlike conventional currencies (euro, dollar, etc.), bitcoin operates in a decentralized manner, without the intervention of a monetary authority such as a central bank.

Bitcoins are created by “miners” who, in exchange, secure transactions on a database, the blockchain. The total number of bitcoins that will be mined, and therefore created, was set at 21 million from the start. As of January 1, there were 19 million bitcoins in circulation. Once bitcoins are created, they can be bought and sold like any asset. This is what investors (individuals, companies or institutions) do to diversify their traditional investments.

The main risk is volatility: the prices of bitcoin and other digital currencies can record double-digit percentage moves in a matter of hours, in either direction. One must therefore accept such a level of fluctuation before committing to it. The crypto market even suffered an earthquake in mid-May with the collapse of the terra-luna cryptocurrency and its stablecoin (cryptocurrency whose course is backed by a classic currency such as the dollar or the euro).

But the fall in prices is not the only danger that the investor must face. Bitcoin theft is a reality, not to mention outright scams.

Bitcoin carries its share of fantasies. Some see it as the currency of the future, others as a threat to the financial system. “We must put an end to preconceived ideas about bitcoin, and better understand it so as not to accuse it of all the evils”, tempers Faustine Fleuret, president of ADAN.

It is above all a new asset class with its strengths and weaknesses. “Bitcoin is a speculative asset. It is not a safe haven and it does not protect against inflation, ”recalls Vincent Boy, market analyst at IG. The current period bears witness to this: the fall of digital currencies over the past six months coincides with the strong rebound in inflation in the United States and Europe and fears of recession.

It is possible to pay in bitcoins in some shops, through an application downloaded on your smartphone. But this is more of an exception for crypto-fans than a real means of payment.

Another solution, some platforms specializing in the purchase and sale of cryptocurrencies offer their customers bank cards allowing them to pay for their purchases at any merchant by debiting their bitcoin account. This is the case with the Binance and Bitpanda Visa cards, which integrate a cashback system with each transaction. But payment in cryptos suffers from a major drawback: “Each sale must be declared as an assignment from a tax point of view. This makes the declaration of capital gains more cumbersome, ”confirms Alexandre Lourimi, lawyer at ORWL, a digital specialist.

Capital gains on cryptocurrencies are taxed when the transaction concerns the sale of a cryptocurrency to obtain euros or dollars. On the other hand, arbitration between cryptocurrencies does not trigger any taxation. Capital gains are exempt if the taxpayer has made less than 305 euros in sales during the year. Beyond that, they are subject to taxation at 30% (12.8% income tax and 17.2% social security contributions).

“The calculation of the taxable capital gain is extremely complex because the tax authorities do not reason crypto by crypto but on the overall scale of the portfolio”, warns Me Lourimi. The taxpayer must declare each sale made during the year and provide a certain amount of technical data such as the acquisition price and the value of his portfolio on the date of the sale. “The platforms provide their customers with their transaction history to help them with their reporting, but it is still very difficult to interpret. And everything gets complicated when you hold accounts with several intermediaries,” says Me Lourimi. However, there are declaration assistance software, such as Waltio or Blockpit. “Next year, taxpayers will be able to opt for taxation at the income tax scale rather than at the rate of 12.8%. Non-taxable investors and those taxed in the 11% bracket will benefit from it, adds Me Lourimi, but beware, this option is irrevocable. Social security contributions of 17.2% will remain due. Note that taxpayers who have opened a crypto account abroad must declare its existence to the tax authorities.