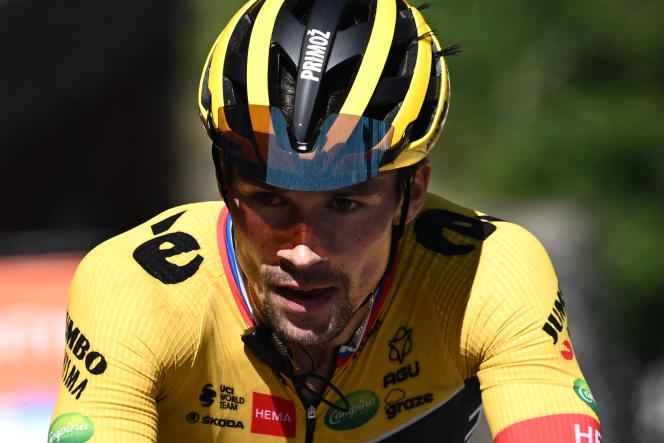 Three weeks before the start of the Tour de France, Primoz Roglic came to remind us that he will have to be counted on among the favorites for the 2022 edition of the Grande Boucle (from July 1 to 24). He finished second in the seventh and penultimate stage of the Critérium du Dauphiné, the first in the high mountains, on Saturday June 11, 2022. The Slovenian (Jumbo-Visma) took the opportunity to take the yellow jersey from the shoulders of his teammate, the Belgian Wout Van Aert, in this eight-stage race.

Winner of Paris-Nice at the start of the season, Primoz Roglic, who has three Tours of Spain to his name (2019, 2020 and 2021), had cast doubts on his state of form in the spring, citing knee pain . He made his return to competition at the start of the week after two months of absence.

At the time of the explanation between favorites, Saturday, during the “queen stage” of this Critérium du Dauphiné (134.8 kilometers covered with two passes outside the category, the Galibier and the Croix-de-Fer), which gave a taste of the July 14 stage of the next Tour de France, the Slovenian swept away the competition by attacking the climb to Vaujany.

Starting 1.5 km from the summit, the climber crossed the finish line twelve seconds ahead of his teammate, the Dane Jonas Vingegaard, who had put him into orbit, and two more than the Australian Ben O’Connor (AG2R Citroën Team).

On the other hand, the Slovenian failed to come back to the Spaniard Carlos Verona (Movistar). At 29, the latter won the very first victory of his career, which began in the WorldTour in 2013. He found himself alone in the lead after losing his last breakaway companion, Frenchman Kenny Elissonde (Trek-Segafredo), at the bottom of the last ascent. The best Frenchman, David Gaudu (Groupama-FDJ), finished the stage in seventh place, 40 seconds behind the winner of the day.

“I came here to regain confidence,” Primoz Roglic said after the race. It was important because it took a bit of time to get back to my level. I feel better and better every day. Now, we will have to finish the program (Sunday). After such an intense week, I will be ready for the Tour de France. »

44 seconds lead in the general classification

Earlier on the alpine roads, the tricolor “veteran” Pierre Rolland (B

In the general classification, Primoz Roglic is now 44 seconds ahead of Jonas Vingegaard and 1 min 24 seconds over Ben O’Connor. Second before the seventh stage, the Italian Mattia Cattaneo is now ejected from the top 10 overall.

Who is the most feared rival now for Primoz Roglic on this Critérium du Dauphiné? Asked about this, the main interested party quoted his teammate Jonas Vingegaard. “As long as it stays in our team, we’ll be happy,” the Slovenian said, all smiles, upon arrival.

Sunday, the last stage ends at the plateau of Solaison, a difficult ascent of 11.3 kilometers (at 9.2%), at the end of a route of 138.8 kilometers which also crosses the Col de Plainpalais and the Colombière, two first category passes.

Finally, it should be noted that the Briton Chris Froome, ill, abandoned the race before the start on Saturday. “Chris hasn’t been feeling well for two days. On the advice of the medical staff, the team decided that it was best for Chris to rest and recover as soon as possible,” the Israel-Premier Tech squad announced. Quadruple winner of the Tour de France between 2013 and 2017, Mr. Froome is looking to become competitive again following his serious accident in the Dauphiné 2019.