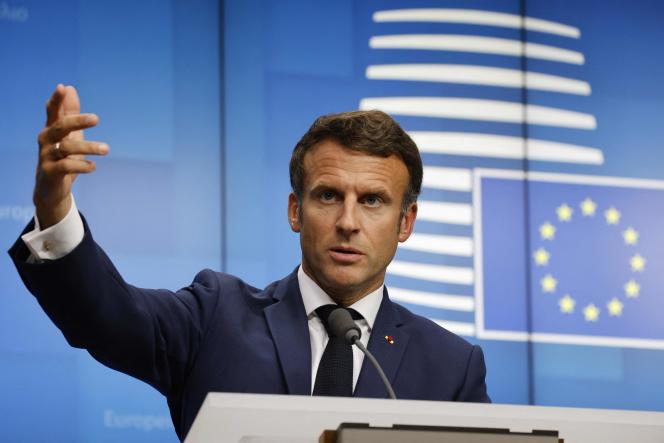 Two days after her speech and while Elisabeth Borne continues to address the presidents and presidents of the groups in the National Assembly, Emmanuel Macron put into perspective, Friday, June 24, his loss of the absolute majority in the National Assembly. “We cannot at the same time consider that our Europe must be a democratic and strong Europe and deplore the fact that most governments and parliaments reflect the democratic life of our countries”, declared the Head of State since Brussels, where he is attending a European summit.

“I believe that’s what Italy and Germany are doing and that’s what we will do, what we will do with all the governing parties, to be able to build either a coalition or [groups] agreements on texts to move forward on a clear agenda,” he said. France “knows how to compromise and including yours truly”, he added during a press conference, promising to work “with a lot of heart, will and optimism” in this direction.

The situation in France is “horribly banal at European level”

“I am very confident because I believe in the good will of the women and men who are there to represent the nation”, who have “different sensitivities but are part of the republican field and the desire to govern, to move the country forward,” he said, without specifying which party he included.

The Head of State endeavored to put the political situation in France into perspective after the legislative elections, noting that it was the common lot of many European countries and that the presidential camp, with 245 seats out of 577, was more close to an absolute majority than in many other Member States. “France is in a parliamentary situation that it experienced in 1988, with few differences, but [which] is above all horribly banal at European level”, he said, noting that on 27 EU member states, ‘twenty’ have coalition governments, ‘some with five, six, seven partners’, and some ‘minority governments’.

“Even if in France there is a relative majority in Parliament today, it appears to be very important compared to many other parliamentary systems with pure proportionality,” he continued. In his speech to the French on Wednesday, Emmanuel Macron estimated that he had “missed around thirty deputies out of 577” on his side, without explaining, when, de facto, he lacks 44 to reach an absolute majority (289) .

Guest of the France Inter morning, MEP Yannick Jadot went in the direction of compromise in the National Assembly. “With regard to emergencies”, he recalled that environmentalists “take part” in the compromise according to the texts presented to the National Assembly, but placed the responsibility on the shoulders of the government, both in the way of reaching a compromise only on the content of the texts.

He added about the political situation and the risk of blockage that it was not the fact of the oppositions, but of the head of state himself. “The situation today is not blocked by the so-called opposition groups, it is blocked by a President of the Republic who is struggling, [by] the presidential election and [by] the legislative elections , underlined the former presidential candidate. Will Emmanuel Macron be the architect of a refounded democracy, or will he remain this president braced on his power, constantly tempting the poaching and submission of other political groups? »

“They totally reverse roles. It’s not the opposition groups who have to say “well, we agree to put Emmanuel Macron’s program in place”, it’s Mrs. Borne and Mr. Macron who have to say what are the points on which they are ready to move forward, ”said Manuel Bompard, deputy of Bouches-du-Rhône from La France insoumise, on Franceinfo, Friday morning.

For the “rebellious” figure, “of course there have to be discussions. But these discussions, they must be initiated by the Prime Minister because she was the one who suffered an electoral setback on Sunday.”

Michel Platini in “Le Monde”, a football legend transferred to the...

News Editor - June 26, 2022 0
The life of Michel Platini took a disconcerting trajectory, like the free kicks brushed by the football player, the ball curving against the laws...