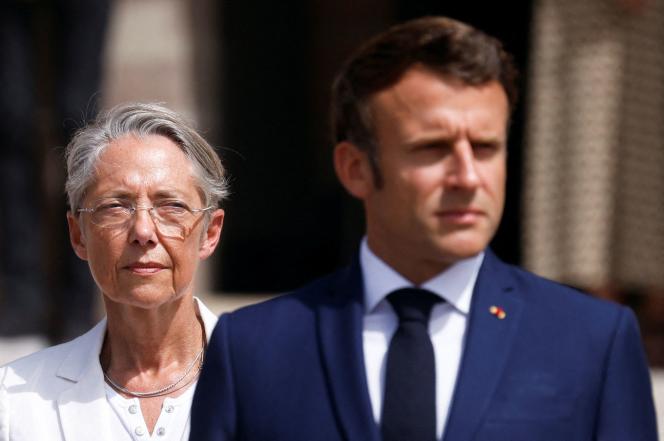 While some were betting on the departure of the Prime Minister after the relative majority acquired by the presidential camp in the second round of the legislative elections, the Head of State decided to renew his confidence in her. In an interview with Agence France-Presse made public on the evening of Saturday June 25, Emmanuel Macron announced that he had asked Elisabeth Borne to present to him at the end of next week “proposals” for “a new government of action” which will be appointed “in the first days of the month of July”.

“On my return from the G7 and NATO summits, the Prime Minister will submit to me proposals for a roadmap for the government of France over the coming months and years, and also for the composition of a new government of action at the service of France that we will put in place in the first days of July,” he said.

The announcement of this new government casting de facto the maintenance at Matignon of the former Minister of Labor, part of the opposition of which demanded the departure to take into account the new political balance which was imposed on the National Assembly . “The Prime Minister has my confidence to lead the government’s action over the long term for our country,” insists Emmanuel Macron. But this choice could also prefigure the appointment within the executive team of new representatives of political forces ready to cooperate with the majority.

Probing the opposition, from communists to LR

To do this, Emmanuel Macron has instructed the head of government to sound out the various parliamentary groups, whose leaders he has already met at the beginning of the week before continuing diplomatic meetings, from the European summit to those of the G7 and of NATO, which will keep him away from the national political scene until next Thursday.

However, this outstretched hand to the various opposition groups is not intended for everyone and explicitly excludes La France insoumise and the National Rally. Possible allies, “it will be communists in LR. The French have granted legitimacy to the RN and LFI deputies and these parties have a political formation. I do not confuse the extremes but by their expression, their positioning – I have always been clear on this subject -, these formations do not register as parties of government, “he justifies.

“Neither taxes nor debt”

Emmanuel Macron also specifies that “the basis of these discussions” between Elisabeth Borne and the representatives of the political class will be the “framework of the presidential project and that of the presidential majority which may be amended or enriched”. At the same time, the Head of State draws several programmatic red lines on which he will not compromise.

Despite his setback in the legislative elections, Emmanuel Macron has not given up on his pension reform aimed at “working longer as all our neighbors do, taking into account working conditions and therefore the rules of hardship, taking into account long careers. Furthermore, his “action government” will increase “neither taxes nor debt”.

In doing so, Emmanuel Macron claims his loyalty “to the commitments […] made to the French and the French in the month of April” while remaining “listening to the message that was sent and translated to the ballot boxes in the elections legislative”.