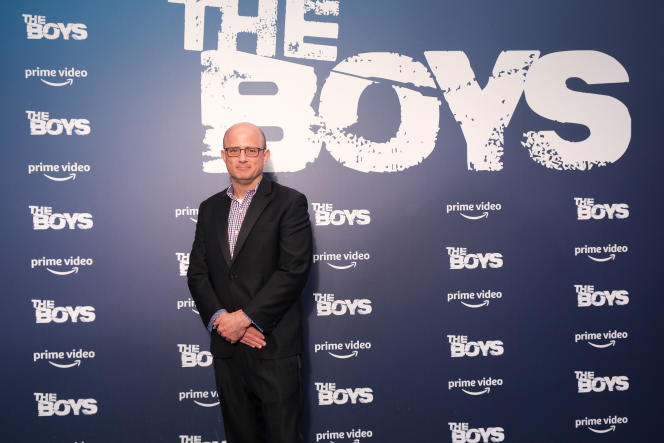 The Boys series returns for an all-new Prime Video season on June 3. The series, created by showrunner Eric Kripke, based on graphic novels by Garth Ennis and Darick Robertson, continues to deconstruct the myth of the superhero through humor and provocation. The Boys follows the tribulations of a septet of ultra-mediatized superheroes in the service of the powerful multinational Vought International, opposed by The Boys, a motley band of victims of superheroes.

Satirizing characters from Marvel or DC Comics, The Boys is also a critique of the cult of celebrity, its monetization and the corruption of politicians by multinational corporations. Met in Paris, showrunner Eric Kripke, who created the Supernatural series ten years ago, details the intentions and methods behind the design of The Boys.

Many people love superheroes. But it would be catastrophic if they existed in the real world. If we give incredible powers to mere human beings, some will abuse them. Through our distorted vision, we want to build a metaphor for today’s society. Many political leaders pose as saviors: “I am a strong man. I am the only one capable of saving you, and my only condition is the guarantee of your loyalty. With these demagogic speeches, the people end up blindly following these leaders, hoping to solve important societal problems thanks to them. The Boys describes this slow descent into authoritarianism through the image of violent, deceptively good superheroes in the public eye.

In the first two seasons, we described society as it is today, season 3 will question how we got here, thanks to the arrival of a new character, Soldier Boy, played by Jensen Ackles with whom I have already worked in Supernatural. Spectators will discover Vought society through the ages, and toxic masculinity will be the common thread of this broad historical panorama. There is, indeed, a generation of leaders around the world who always put power before compassion just to satisfy their morbid need for power. This is exactly what is currently happening in Ukraine with Putin. We want to show that this masculinity is a real poison for our society.

This violence comes from our desire to explore, with Seth Rogen [executive producer], what would happen if superpowers existed in reality and what this superpower could do to human beings who possessed them. For example, when Superman uses his laser beams against his enemies, it’s not really bloody. Whereas with Homelander, which is a satire of Superman, the violence of his laser can cause a lot of damage. We then break with the idealistic image of the superhero, for more realism.

We ridicule capitalism, the over-marketing, the commercialization of fame, symbolized by the powerful corporation Vought. Because sometimes the only thing we can do to better convey a message is to laugh about it. I think we live in dangerous but also absurd times.

With Seth Rogen, we especially wanted to respect the general tone of the comic strip which sought to deconstruct the myth of celebrity. There are many stars who, in appearance, are noble and heroic, but who, in reality, are involved in unclear activities. And for that, Amazon has not, in fact, imposed any limits on us. The only limits are those that I impose on myself. Anything shocking in the show has to say something about the character or has to move the story forward, otherwise it’s pointless. I’m not going to put on a sex scene just to put on a sex scene.

The cool thing about this genre is that you can be as subversive as you want. Major political, societal or family issues can be evoked through symbols such as terrifying monsters or superheroes. And it will be exciting and entertaining. But, implicitly, the spectators will always have something to think about. Whereas, when these same issues are brought up in more dramatic genres, it can quickly become boring.