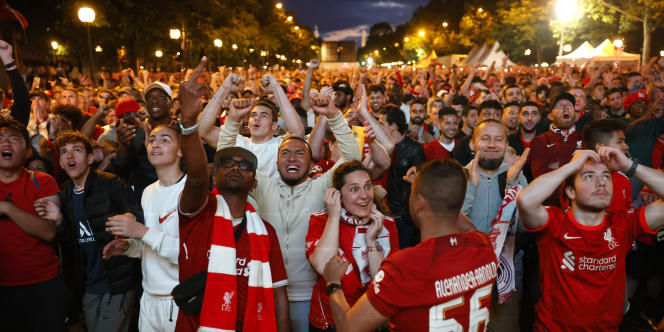 The final of the Champions League football, which opposed Liverpool to Real Madrid, Saturday, May 28 at the Stade de France (Saint-Denis, Seine-Saint-Denis), will long leave a bitter taste to the supporters of the English club. More than the defeat of the “Reds” (1-0), the scenes of chaos experienced around the Dionysian enclosure came to taint the memory of a day that had started with festive airs in the streets of Paris.

A real red tide had invaded the capital, and in particular the fan-zone, installed Cours de Vincennes, in the 12th arrondissement. It was always full as the match approached: while 20,000 Britons had the precious ticket to the Stade de France, about twice as many watched the final in front of the giant screens set up for the occasion or in Parisian bars.

“Even without a ticket, it’s so worth it”

An impressive number, but not surprising. It’s part of the Scousers’ culture to support their team all over Europe. With or without the prospect of going to the stadium. Rohan Sood, 22, from London, assured Agence France-Presse even before kick-off: “Even without a ticket, it’s so worth it. After all, doesn’t the club anthem say “you’ll never walk alone”?

A total of 70,000 Reds supporters were expected in the capital this weekend. Since Paris replaced Saint Petersburg at short notice, deprived of competition following Moscow’s decision to invade Ukraine, preparatory meetings had been linked to define the host system for the meeting.

More than for any other sport, football unleashes passions and the holding of an event of this scale poses constraints for the organizers, from the management of the security perimeter around the stadium to the regulation of the sale of alcohol including setting up and maintaining fan-zones.

According to the Minister of the Interior, Gérald Darmanin, and the Minister of Sports, Amélie Oudéa-Castéra, there is a link between the massive transhumance of the English in Paris and the incidents which occurred around the stadium. “Thirty thousand to 40,000 supporters found themselves at the Stade de France either without a ticket or with falsified tickets”, reaffirmed Mr. Darmanin, Monday, May 30, after a ministerial meeting.

“Fancy” figures, swept on Twitter Ronan Evain, general manager of Football Supporters Europe, an association accredited as an observer of the matches with the Union of European Football Associations, and himself present on the spot on Saturday.

The version of the French authorities is undermined by the accounts and testimonies of journalists – The Athletic, DW, Sky Sports, BBC – who attended the events. Liverpool police, deployed to the scene as observers and liaison officers, further pointed out that the “overwhelming majority” of supporters “behaved in an exemplary manner, arriving early (…) and queuing” as requested .

Mass travel is not unique to “Reds” fans, nor just England fans. On May 25, the National Arena in Tirana (21,000 seats) hosted the Europa League Conference final between AS Roma and Feyenoord Rotterdam. More than 100,000 Italian and Dutch supporters headed for Albania. The day before the meeting, violence broke out in the city. About twenty police officers were injured, including one with a knife, by interposing themselves between the two camps. Ten supporters went to hospitals for treatment, Albanian police reported.

A few days earlier, on May 19, around 130,000 Germans and Scots had traveled to Seville, Spain, for the duel between Eintracht Frankfurt and Glasgow Rangers in another final, that of the Europa League. Despite the arrest of five German supporters after an altercation with opposing fans before kick-off, no major violence was reported. On the other hand, some Scots claimed to have had a “terrible experience” at the Sanchez Pizjuan stadium, due to the overzealous security arrangements. As the mercury hovered around 40°C, several of them were deprived of water and food, a situation that led to fainting.

This transhumance brought back some memories to the Andalusians: in 2003, more than 80,000 fans of Celtic, Glasgow’s other club, had joined the city by road or by air to experience the UEFA Cup final between their team and FC Porto. Already, most had come without places for the match, sometimes ready to sleep in the streets.

Particularly marked among the British, this phenomenon of travel, without tickets, has been reinforced in recent years. “The fundamental difference over the past twenty years has been the democratization of low-cost flights: it promotes fan travel. Today, beyond the presence and entertainment in the stands, traveling en masse is clearly becoming a source of pride,” observed Mr. Evain to Le Monde before the final at the Stade de France.

The observation is shared by the author and football historian David Goldblatt, not surprised by the red tide of tens of thousands of Liverpool fans in Paris. “There’s been a huge trend over the past two decades for young English and Scottish people to get on cheap planes and go drinking in a city for a weekend. Add to that the football, now on a giant screen… It’s clearly a different experience from that of a pub in the north of the United Kingdom, ”argues the Londoner.

One thing is certain, it is not likely to happen this fall, during the World Cup in Qatar. Without a ticket, it is impossible to book accommodation on the official platform or to apply for a Hayya Card acting as a visa.