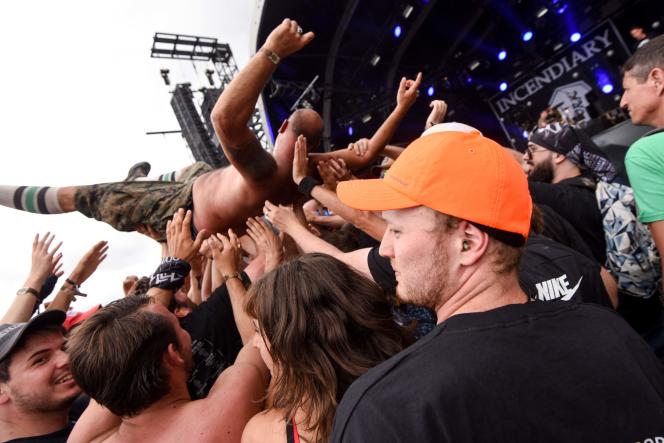 June 2022. The Hellfest festival is in full swing in the town of Clisson, in Loire-Atlantique. On average, 65,000 spectators come every day to enjoy the rhythm of metal music. But, this year, the event has some unusual visitors. At the heart of the public, two researchers from the National Institute for Research in Digital Sciences and Technologies (Inria) dance for science. They are distinguished by their orange caps and their suits full of sensors. Written on their back: “Hellfest

Sensor data combined with images taken by a camera from the stage allow them to observe how the audience moves. “At Hellfest, the dances are quite physical. We are trying to understand how people are in contact and how these contacts become movements that spread through the crowd,” summarizes Julien Pettre, researcher at Inria Rennes. The institute is conducting this study as part of the CrowdDNA project, launched in 2020 by the European Union. The initiative brings together specialists in biomechanics, physics, cognitive science and computer science from several European countries. Their goal: to prevent accidents in large gatherings.

“Crowd management is usually a manual process,” says Julien Pettre. Staff on site have a very partial view of the crowd. Several examples show that this mistaken perception can lead to disasters. Some have claimed tens of thousands of lives at musical, religious and sporting events over the past decades. Victims ran out of oxygen after being overcrowded. Others lost their footing and were trampled on.

A stampede during a rally in Mecca in 2015 claimed the lives of some 2,300 people. More recently, on November 5, 2021, ten people died and more than 300 were injured when spectators crowded the front of the stage at a concert by rapper Travis Scott in Texas.

For the seven CrowdDNA project teams, spread across four European countries, understanding such phenomena begins in the laboratory. At the research center in Juliers, Germany, three people equipped with sensors are placed in line on a mattress. An impulse is given to the individual at the back and propagates forward. Then, the experiment is repeated with five, ten, thirty and fifty people. Human pendulums, like these aligned balls which transmit their energy to their neighbors, in a way. Except that here the muscles of the bodies bring additional energy to the system. The researchers thus observe how a moderate flare-up can take on a large scale.

The team also uses the results of its experiments on the behavior of large groups, carried out a few years earlier. One of them brought together 200 people who had to leave simultaneously a place with a single exit. “We were able to study how the density increased, how a blockage was created in front of the exit, how individuals came to lose control of their arms, so stuck were they,” explains Armin Seyfried, civil security specialist at the research center of Juliers.

At the Inria laboratory at the University of Rennes, scientists are more interested in individual reactions. With their devices, they give thrusts in the back, on the arms, on the shoulders of the participants. They analyze the movements of people to regain their balance.

With the data collected in the laboratory and in the field, the project teams seek to better model crowd movements. Current models generally view dense clusters as moving fluids, or clusters of discs, in two dimensions. They do not take into account the physical interactions between individuals. David Wolinski, scientific director of Onhys, a company involved in the project specializing in modeling pedestrian flows, explains: “If a disc falls, not much happens. But if a real person falls, part of the area becomes rugged and prone to trampling. »

In their models, CrowdDNA researchers integrate both their biomechanical and behavioral data. The idea is to be able to transmit in real time, from cameras filming mass events, information on crowd movements and the risk of accidents. If the risk is too high, an alert will be issued. In the case of a concert, for example, the organizers could then interrupt the show so that the public disperses, or even cancel it.

Mehdi Moussaid, a crowd behavior specialist who is not involved in the project, welcomes this initiative, which he describes as “extraordinary”. “These crowd-connected machines will be able to transmit metrics that are very difficult to assess with our eyes, such as degrees of density and pressures that could prevent people from breathing. They will be really helpful. »

The teams will have until the end of the project, scheduled for October 2024, to develop these technologies. But, already, Julien Pettre, from Inria, is ready to give a first verdict on the crowd he studied at Hellfest. “From the outside, we can say that what is happening is quite violent,” he notes. But, inside, we realize that it is very well controlled. So our system looks like everything is going well. »