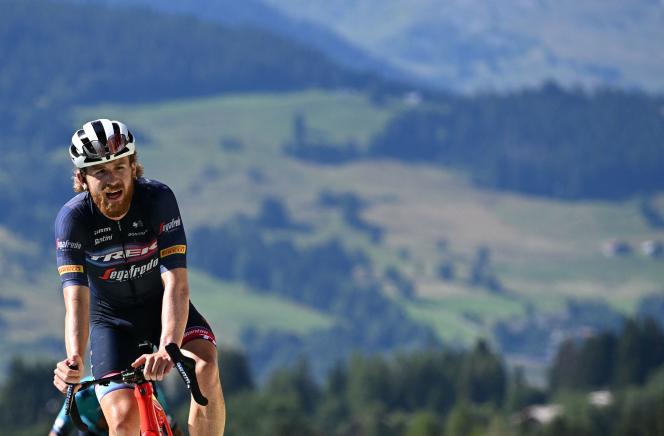 When he was a child, Quinn Simmons was not really passionate about cycling. The native of Durango, in the mountains of Colorado (USA), says he was a little “annoyed” to see his father spending so much time in front of the television watching the Tour de France. He was more into ski mountaineering.

Five years later, it is nevertheless on the roads of the Grande Boucle that the 21-year-old cyclist drags his smile – rarely masked despite the threat of Covid-19 – for his first participation in the queen event of road cycling. . “The final decision was taken during the Tour de Suisse [finished June 21, with the best climber’s polka dot jersey]. In my head I had prepared as if I was going, but we are always a little nervous until the last yes”, rejoices the rider of the Trek-Segafredo team.

If Quinn Simmons is the youngest of this 109th edition, he is also one of the seven Americans present at the start of the event, in Copenhagen, on July 1. Unheard of since 2014. “I am convinced that this number will continue to grow”, slipped Kevin Vermaerke (DSM), forced to retire in the 8th stage between Dole (Jura) and Lausanne (Switzerland), July 9 .

“Less support in the United States”

“There were several American waves on the Tour: in the 1980s with Greg LeMond, then in the early 2000s with Lance Armstrong. We’re on the third,” said Franco-American photojournalist James Startt, author of Tour de France/Tour de Force. A Visual History of the Worlds Greatest Bicycle Race (Chronicle Books, 2000) and thirty-three Grandes Boucles on the clock.

What is striking in this new wave is as much its youth as its dissemination in the peloton. Apart from climbers Sepp Kuss (Jumbo-Visma), 27, and Joe Dombrowski (Astana-Qazaqstan), 31, the other five riders are 25 or younger. Above all, all evolve in different teams, when in the past the American contingents rolled for formations flying the flag of the country like 7-Eleven, Motorola or US Postal.

Brent Bookwalter, who spent a large part of his career with one of them (BMC Racing), sees this as a sign of a change in mentality. “As a young rider, as an American, riding for a French or Spanish team means immersing yourself in a different culture and it could seem very intimidating,” says the native of Albuquerque (New Mexico), consultant on the Tour for the Flo TV channel.

There is another, more prosaic explanation: “There is less support for road cycling in the United States: less races, less teams, less infrastructure”, he summarizes. Blame it on the economic situation, but also on the doping cases which had strong consequences on the commitment of sponsors and popular enthusiasm.

Ian Boswsell grew up with the exploits of the “boss”. In the eyes of the former rider of the British Sky and Swiss teams Katusha-Alpecin, his heritage remains ambiguous. “Lance is the reason we have invested so much in cycling in the United States,” said the 30-year-old. This guy from Texas who manages to dominate the most prestigious event in the world has shown us that it is possible. »

His fall left a void and his compatriots have long maintained an image of “dirty” runners. But the biggest worry, he insists, was that a good part of his generation wanted to be general classification riders, “when they would have been probably better on more specific terrains”. Like Tejay Van Garderen, a time trial specialist, but rarely consistent over a three-week race.

From now on, the ambitions are more discreet and varied. “I may never be an overall rider on a Grand Tour, but maybe after riding my bump a few years on the road I could aim for one-week races,” says Quinn Simmons, for example. .

“The figure of the champion”

The results are starting to come. On July 7, 2021, Sepp Kuss crossed the finish line alone in Andorra la Vella, giving the United States their first stage victory in the Tour de France since Tyler Farrar in Redon (Ille-et-Vilaine) , in 2011.

In the first week of this 2022 edition, Neilson Powless (EF Education EasyPost) came within seconds of wearing yellow: never an American had been so close to the top of the general classification since Tejay Van Garderen, in 2018 – equal time with his Belgian teammate Greg Van Avermaet, at the end of the team time trial.

From memory of followers, we see less Star-Spangled Banner, the flag of the United States, on the sides of the road than during the great hours of Armstrong. In the country, “road cycling remains very much linked to the figure of the champion”, explains James Startt. “I saw it being Tejay’s teammate, accompanying him through the ups and downs of his career: Americans loved him when he was doing well and jeered at him when he was tougher,” says Brent Bookwalter. This group, today, can share this burden. It’s not like any of them are being brandished as “the” new face of American cycling that all the hopes are in. Enough to give them time to find their strengths and make this new wave last.