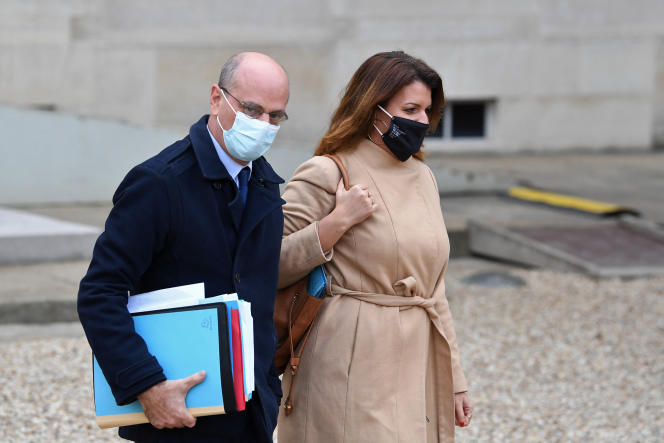 Some were announced on departure, others wanted to turn the page of ministerial responsibilities. All marked the first five-year term of Emmanuel Macron. Several heavyweights from Jean Castex’s government were not reappointed to the first government team led by Elisabeth Borne announced on Friday May 20. Among them: Barbara Pompili, Jean-Michel Blanquer, Julien Denormandie, Marlène Schiappa, Jean-Yves Le Drian and even Florence Parly.

She had succeeded in establishing herself as a heavyweight of macronie by embodying her environmentalist wing, but disappeared from the government team when Emmanuel Macron wanted to press the accelerator on the environmental transition.

If some regularly liked to question his loyalty to the head of state, Ms. Pompili had been the first member of Bernard Cazeneuve’s government, at the end of François Hollande’s five-year term, to support candidate Emmanuel Macron in March. 2017.

Aged 46, the former environmentalist MP carried the Climate law in 2021 after a citizens’ convention. His biggest feat of arms but also a symbol of the great Macronian gap on ecology. Co-pilot of In common, a small party of the left wing of the majority, she is a candidate for the legislative elections in the Somme.

After a five-year term on rue de Grenelle – a record under the Fifth Republic – Jean-Michel Blanquer can boast of having driven the reform of the baccalaureate, the duplication of CP and CE1 classes in priority education areas, and having worked to keep schools open as much as possible despite the Covid.

He also had to manage the assassination of Samuel Paty, this history and geography professor beheaded in October 2020.

But this “techno”, criticized for its rigidity and its immoderate taste for communication, arouses mistrust and even rejection from a good part of the teaching world and the left. A claimed opponent of “wokism” and “Islamo-leftism”, he seeks to continue the political adventure by embarking on the battle for the legislative elections in the Loiret.

Faithful from the first hour of Emmanuel Macron, Julien Denormandie had been Minister of Agriculture and Food since July 2020 after having held the positions of Minister in charge of the city and housing and Secretary of State to the Minister of territorial cohesion since 2017.

Much appreciated by the agricultural world, this 40-year-old, a bridge, water and forest engineer by training, was less popular among ecologists, who criticized him for being only the spokesperson for the FNSEA and agro-industry. .

Regularly announced as a possible successor to Alexis Kohler, the all-powerful secretary general of the Elysée, Mr. Denormandie has however announced that he wants to devote more time to his family.

After ten years in the executive, five as Minister of Defense under Hollande, then five at the Quai d’Orsay, the dean of the government, 74, hangs up in the midst of an international crisis. Coming from the socialist party, this baron of politics in Brittany, nicknamed the “menhir”, was the number two in the government.

Fight against jihadists in Iraq, Syria and Mali, diplomatic rupture with Bamako, submarine crisis with Australia, global pandemic, invasion of Ukraine by Russia: Mr. Le Drian had to face the rise of tensions in international level against the background of the crisis of multilateralism.

Aged 59, Florence Parly is unsurprisingly leaving the Ministry of the Armed Forces, which she had been leading since 2017. Secretary of State for the Budget under Lionel Jospin from 2000 to 2002, this discreet personality fought tenaciously for a strong increase in the means of the armies. In recent months, she has had to deal with the fiasco over the mega-contract of French submarines with Australia, the withdrawal of the “Barkhane” force from Mali, and the war in Ukraine.

In office as Secretary of State in charge of equality between women and men and the fight against discrimination, at the time of the wave

Media figure of Emmanuel Macron’s first five-year term for his commitment against sexual and gender-based violence, however, she saw her star fade after her time in Beauvau in the shadow of Gérald Darmanin. She has published several books, including This is a good situation, that, minister?, the latest.