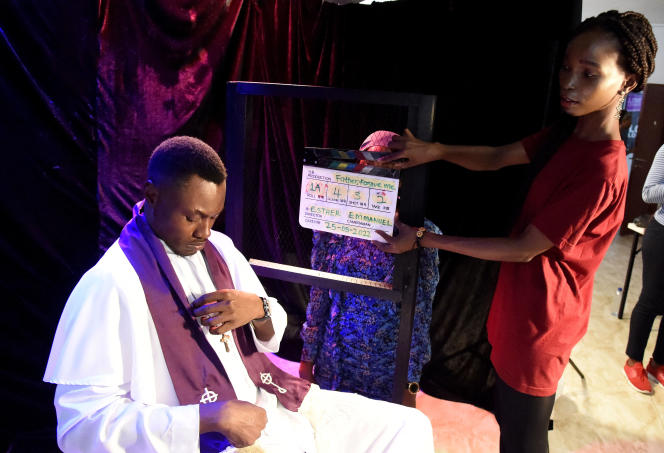 With a Spielberg cap on her head, the apprentice director Esther Abah gives her final instructions to her actress and goes back to settle behind the monitor. In the studios of EbonyLife Creative Academy, a brand new film school in Lagos, the team of about 30 students are “ready to shoot”. In this faux velvet confessional, they film their short film, Father Forgive Me. “3, 2, 1, action!” “, launches the young director while, on the advice of a professor, the sound engineer still adjusts his boom.

At 30, Esther Abah has already made several short films and music videos in Nigeria. But by entering school, she “wanted to learn how to make films with another perspective,” she told AFP. Based in Lagos, the bustling cultural capital of Nigeria and all of West Africa, this academy aims to train young professionals in Nollywood, the very powerful Nigerian film industry, to make films capable of being exported to outside the African continent.

Rare in the country, training is free and fully funded by the State of Lagos, which has understood that its creative and ambitious youth are a real wealth and that the sector, better supervised, could be a huge provider of jobs. “We want our students to be able to tell Nigerian stories for an international audience in a format that is accessible to the world,” school principal Theart Korsten told AFP.

All film professions are represented there (directing, acting, production, screenplay, sound, artistic direction, etc.) and the teachers are Nigerian, South African or Kenyan, with international experience.

Until recently, Nollywood, which produces more than 2,500 films a year, was not actively seeking to conquer the global market, with Nigeria’s 215 million people and immense cultural influence on the continent. Since the rise of this industry in the 1980s, the vast majority of Nigerian directors have made their films in a few weeks with less than 20,000 dollars (less than 19,000 euros). Films “financed in Nigeria and produced for a Nigerian audience”, notes Alessandro Jedlowski, an anthropologist specializing in Nollywood at Sciences Po Bordeaux.

But in the early 2010s, faced with massive piracy that annihilated Nollywood’s economic model, some distributors gradually moved towards a “more formalized market”. It is also the advent of satellite channels, new cinemas… and above all paid streaming. They then target the Nigerian elite and the wealthier African diaspora, says Jedlowski. Budgets are increasing and the type of films are changing, headlined by romantic comedies featuring Lagos’ gilded youth.

The rise of major global streaming platforms such as Amazon or Netflix also opens up Nollywood to a much wider international audience. “Films from South America, Asia or countries almost unknown in Europe are successful on the platforms, so many Nigerian directors have realized that their films can be seen on a global scale,” says the director Daniel Oriahi, professor at EbonyLife Creative Academy: “But for that, they have to conform to different standards in terms of storytelling or technique. »

So at the academy, we encourage screenwriters and directors to try out other genres, drama or thrillers for example. Actors, on the other hand, are trained to play differently to belie their – bad – reputation in the world of cinema, that of lacking realism or overplaying their role. “We talk loud, we’re excited, it’s all very dramatic at home and it shows in our films. But you can convey the same information without overplaying and having a viewer in Asia relate to your characters,” Oriahi says.

These different criteria, the powerful production company EbonyLife understood them well. And it is no coincidence that it has become one of the main partners of Netflix in Nigeria. It is to train the professionals of this new Nollywood, but also to identify the best talents, that she launched this school. And it was within its first promotion that the production company spotted Genoveva Umeh, the star actress of Blood Sisters, the first Nigerian series co-produced by Netflix, broadcast since the beginning of May. Other students have been recruited as interns on a film in preparation with Amazon.

Projects abound and in 2021 alone, Nollywood brought in $660 million in revenue to the country, or 2.3% of the GDP of Africa’s largest economy. According to financial analysts, its growth potential is immense. So for Esther Abah and her comrades, it is not only in Los Angeles that it is possible to dream. Also in Lagos.