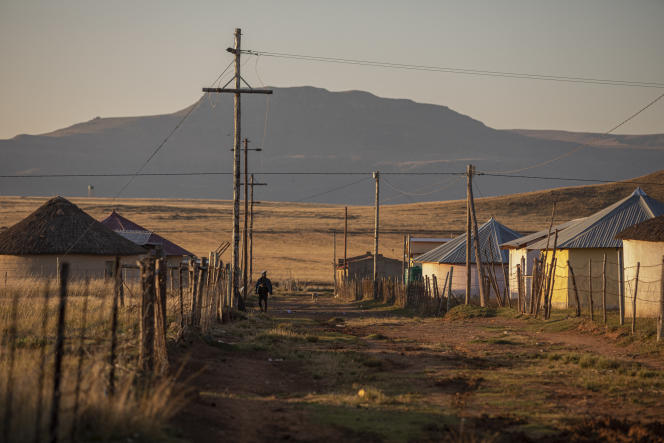 Sleep has long since left this remote corner of South Africa: eleven people have been murdered here in a year, about one a month, with clockwork regularity – earning the hamlet of 3,000 souls the ominous nickname of village of death”. The crimes take place after dark. In Zingqolweni (southeast), the sun sinks behind the line of green mountains as soon as 6 p.m. No electricity in the dirt streets, the village is then plunged into thick darkness.

That day, Nobongile Fihla, 50, returned from the cemetery. His mother is one of the first victims. She was killed in May 2021. “I found her body here, by the door. She was lying in a pool of blood,” she told AFP. His aunt, who shared the modest thatched-roof house, was killed the same night, stabbed. Nobody saw anything, heard anything. In this rural Xhosa-speaking region, more than three hours’ drive from the first town, the houses are far from each other. All the victims are elderly, the majority are women, most lived alone.

The eleven victims received multiple stab wounds. Some also had their throats cut. “They blew out,” a police source who participated in the investigation told AFP. In police memory, this is the first case of this type. Certainly, South Africa, one of the most violent countries in the world, has a homicide every twenty minutes. “But serial murders of old people, no. It’s unheard of,” the source said.

Six men have recently been arrested. Their trial is due to begin in June. According to local police, it was a series of burglaries that went wrong. But for local official Gcinikaya Koki, 64, the investigators, who only found a piece of clothing, are on the wrong track. People are not rich here, many live on welfare. The houses were returned, but no valuables were taken. “Money was found after the murders, so what did they want? »

The idea that it is the work of a serial killer haunts people’s minds. And continue to sow terror. Some fled the village. Women gathered at night to sleep together. Shelling corn on a stool in front of her house lost in the middle of the fields, Nontukunina Mbenyana, 82, recounts the fear. “If it’s my turn, I’m ready,” she says. I will die at home. »

A police team specializing in serial crimes visited the scene several times. A single modus operandi, regular murders committed at the beginning of each month, no obvious trace of a villainous motive: no doubt, for them it is one and the same man. Rather young, strong enough to get the better of his victims, probably from the neighborhood and harbored a hatred for the elderly. “He knew who lived there. And who lives alone, ”says an investigator.

For many months, the authorities remained silent on the case. At the end of the day, some decided to take the law into their own hands: at the end of 2021, seven men aged 21 to 27 were found dead. Suspected of being behind the crimes, they were burned alive or hanged in a nearby forest. Twelve men were arrested for these murders, then released for lack of evidence. The investigation continues. In the village, it is omerta. “Nothing happened here,” says a man, jaws clenched, rushing into his pickup.

Lately, the macabre series has stopped dead. The mystery remains intact. Reinforced police surveillance and media attention may have deterred the murderer “for a time”, believes the investigator. “Sometimes serial killers whose actions are starting to come to light change their scope. We may meet him again elsewhere…”