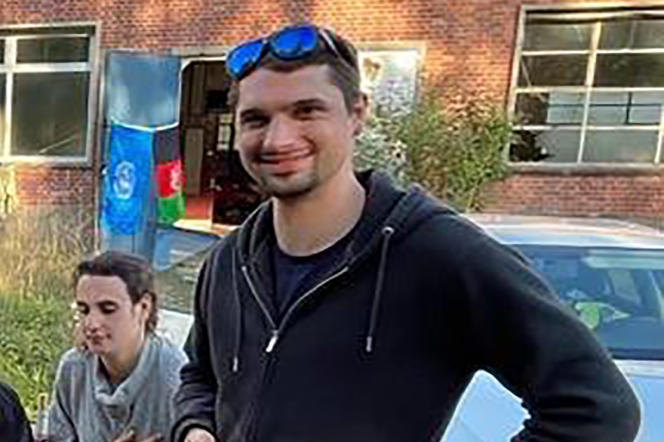 A French journalist, working for the BFM-TV channel, was killed on Monday in Ukraine and his colleague injured, while accompanying civilians on board a humanitarian bus, bringing to eight the number of reporters killed since the start of the Russian invasion.

“Journalist Frédéric Leclerc-Imhoff was in Ukraine to show the reality of the war. On board a humanitarian bus, alongside civilians forced to flee to escape Russian bombs, he was fatally shot,” French President Emmanuel Macron wrote on Twitter. “To those who carry out the difficult mission of informing in the theaters of operation, I want to reiterate France’s unconditional support,” he added.

The head of French diplomacy, Catherine Colonna, claimed in a tweet that the reporter had been “killed by a Russian bombardment on a humanitarian operation while exercising his duty to inform”, condemning a “double crime which targets a humanitarian convoy and a journalist”. The minister “demanded” “a transparent investigation as soon as possible to shed full light on the circumstances of this tragedy”.

“I asked him to do everything possible for the Ukrainian authorities to help us and allow the return [of the body] to his family as soon as possible, once the legal formalities are completed. He promised me he would help. »

Ms Colonna denounced “a drama which is, in reality, a crime”.

BFM-TV confirmed the death of its 32-year-old image reporter on its antenna. He was hit by “shrapnel while following a humanitarian operation”, she said. This was the second assignment to Ukraine for the videographer, who had worked for BFM-TV for six years. Journalist Maxime Brandstaetter, who accompanied the JRI on this report, was “slightly injured”, the channel said.

Since the start of Russia’s invasion of Ukraine, at least eight journalists have died in the field in the exercise of their profession, according to a count by RSF (Reporters Without Borders).

“We strongly condemn this assassination. The list of Russian crimes against media professionals in Ukraine continues to grow,” Oleg Nikolenko, spokesperson for Ukraine’s foreign ministry, tweeted. According to this official, “the Russian army bombed a vehicle which was to evacuate civilians from the war zone, near Sievierodonetsk”.

The governor of the Luhansk region had warned in the afternoon on the Telegram network that the operation, which aimed to evacuate ten people, had been canceled as a result. “The armored truck was not hit directly, but shrapnel went through the armored windshield. A splinter hit Frédéric, ”said Patrick Sauce, senior reporter for the news channel. “Maxime was located in the back, he was injured in the leg. Oksana Leuta, the Ukrainian fixer-translator is doing well,” the journalist added.

“Frederic was not a hothead. He weighed every minute of his mission, “said visibly moved Marc-Olivier Fogiel, general manager of BFM-TV, on the set of the channel. The three members of the team “exchanged like every morning [to assess the risks]: Oksana and Frédéric felt that the mission was secure enough to be able to go there. Maxime, he had more questions, as he could have had the day before or the next day. But (…) it’s also that, a reporting team, it’s very close-knit people, they decided to go there, “explained the boss of BFM-TV. “[His mother’s] first reaction on the phone was to ask how Maxime and the fixer were doing. She knew what her son’s job was (…) with a form of pride,” he concluded.

The Bordeaux Aquitaine Institute of Journalism, where Frédéric Leclerc-Imhoff had graduated in 2014, told Agence France-Presse that they keep “the memory of a student as endearing as he is passionate, rigorous and sensitive”.

Jordan Bardella, acting president of the National Rally, speaks of “great sadness to learn of the death of a French journalist, Frédéric Leclerc-Imhoff, in the Russian bombardment of a humanitarian convoy in the Donbass. Huge respect for war reporters, who defend the freedom to inform at the risk of their lives”.

Alexis Corbière, deputy of La France insoumise for Seine-Saint-Denis, recalls that “freedom of the press is the essential mark of our collective freedoms. At the forefront of this great task, so difficult and so abused, there are always the courageous war reporters. Tribute to Frédéric Leclerc-Imhoff and all his relatives and colleagues. »

Fabien Roussel, National Secretary of the French Communist Party, writes: “The horror of war and the death of Frédéric Leclerc-Imhoff. He exercised this essential profession which informs, testifies and deciphers. »

The former EELV presidential candidate, Yannick Jadot, “sends [his] condolences to the family, relatives and colleagues of Frédéric Leclerc-Imhoff, a journalist killed in Ukraine to inform us of the ongoing genocide”. Anne Hidalgo, socialist mayor of Paris, wrote on Twitter that “he was in Ukraine to exercise his profession: to inform us. Respectful and saddened thoughts. »

“We all share the pain of the family, friends and colleagues of Frédéric Leclerc-Imhoff,” wrote Michel Barnier, former candidate for the Republican primary.