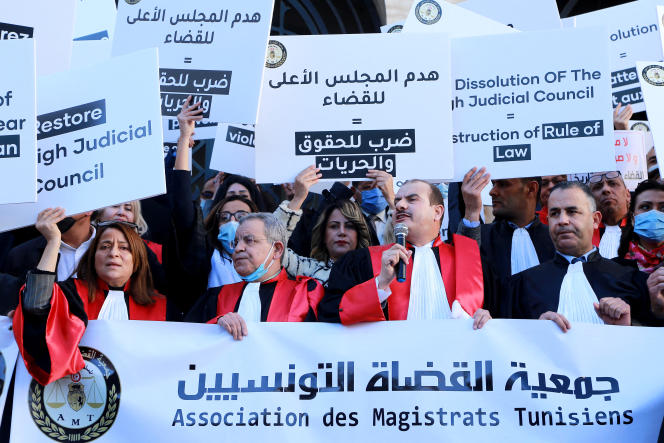 To the dismissal was added opprobrium. Revoked by Tunisian President Kaïs Saïed on Wednesday June 1 with 56 of his fellow magistrates, Keira Ben Khelifa has been the subject, since the beginning of the month, of an online harassment campaign. The judge saw her private life unpacked on social networks, and in particular the extramarital affair, which earned her to be accused of “contempt of morals”. A reason invoked by President Kaïs Saïed himself.

The case that took hold of the Web dates back to 2020. The judge, who has since confided in local media, explains that she welcomed a man with whom she had an affair into her home one evening. The wife of the latter, who sought to prove her husband’s adultery, warned the police. An intervention that had legal consequences and forced Keira Ben Khelifa to submit to a virginity test. In Tunisia, adultery is punishable by five years of imprisonment and contempt of morals by one year according to the Penal Code.

The file was finally closed, but its content opportunely resurfaced on the Internet on Saturday June 6 when Thameur Bdida, a blogger claiming to belong to the July 25 Movement favorable to Kaïs Saïed, made public the minutes of the case, the personal data of Keira Ben Khelifa and even her medical examination of virginity… The commentator also claimed that another dismissed magistrate was involved in a case of adultery. Documents and statements that have since circulated extensively on social networks.

“It’s psychological violence and incredible humiliation for these women,” said activist and lawyer Bochra Belhaj Hmida. “Under the regime of Zine El-Abidine Ben Ali, there were gutter newspapers that published scandalous cases fabricated from scratch or defamatory against women from the political opposition or activists, but today, with the social media, this kind of thing takes on a whole new dimension,” she explains.

“The fact that women’s bodies are instrumentalized in this way and their private lives speaks volumes about the archaism of our society,” laments historian specializing in feminist issues, Dalenda Largueche, deploring that the president mentioned , in her speech announcing the dismissal of judges, the case of a magistrate “caught red-handed in a sex scandal”. Kaïs Saïed, recalls the researcher, has never hidden his conservatism on these issues: in August 2020, a year after his election, he had buried the project of equality between men and women carried by his predecessor, the late Béji Caïd Essebsi, preferring the notions of justice and equity promoted by Islamic law.

A hundred people – magistrates, lawyers and members of civil society – showed their support for the disembarked judges, Wednesday, June 8, before the Tunis court. “We made a revolution for freedom, not for virginity tests!” they chanted, adding, “We want equality and freedom, not the law of Dar Joued,” in reference to the reformatories where Tunisian families sent adulterous or disobedient women between the 16th and 20th centuries. “The fact that we refer to it today in a slogan says a lot,” says Dalenda Largueche. This reflects the fear of a regression to medieval methods. »

Since the 2011 revolution, feminist activists have fought tirelessly to ensure that women’s rights do not regress in the country. In 2012, when the Islamo-conservative Ennahda party wanted to incorporate the notion of “complementarity” between men and women into the Constitution, rather than equality, the debate sparked outcry. In 2017, the passage of a law against violence and discrimination against women is considered a “historic milestone” for the country. “But today, we still come back to the question of the female body and societal taboos, also because the Penal Code has not been reformed on all these questions of individual freedoms, which are nevertheless guaranteed by the 2014 Constitution. adds Dalenda Largueche.

In response to the controversy, Neila Zoghlami, president of the Tunisian Association of Democratic Women (ATFD) – a historic collective for the defense of women’s rights – declared on a Tunisian radio that it is “shameful to link the honor of ‘a woman to her body’. The association called for a new protest movement on Friday, June 10. But political analyst Ahlem Hachicha Chaker deplores that the indignation does not win over the population more. “Apart from a few circles, associations and feminist activists, we hear few voices condemning such archaic practices or the attack on the physical and moral integrity of a woman,” she denounces.