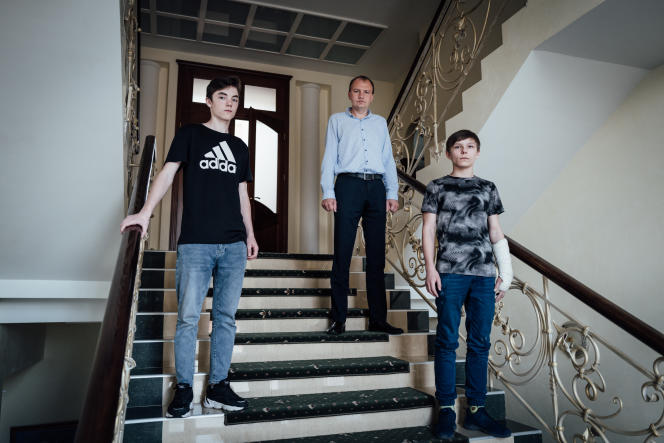 At the polytechnic college, the children of the boarding school heard shelling in the early morning of February 24. They took them for practice shots. Explosions had been ringing out in Mariupol, in southeastern Ukraine, for a few days now. It was 16-year-old Ivan Matkovsky who announced it to the others: “This time, we will know the real war. He saw it on social media.

About twenty kids are then boarders. Coming from the countryside to follow their studies, most have already returned to their villages. Ivan, he, like two other students, has no one. In a changing world, the orphans’ journey has just begun.

In Mariupol, the electricity stops, then the water, then the connections. In several establishments, the staff fled, abandoning the students. The director of the college, Anton Bilay, 41, cooks meals at home which he takes to boarding school in person, and under grapeshot. The college does not have a secure shelter. The director ends up asking the police to evacuate the orphans. On March 5, they transferred to the technical university. There are gathered the weakest: women and children, infants. No men, except a few old men. Hunger obsesses them as much as fear, sometimes more. Outside, the temperature fell to -12°C. Inside too.

After two weeks, Ukrainian soldiers come to advise them to flee: the city expects intense bombardments. You have to imagine the little troop staggering out of the shelter at dawn on March 19. Most have not seen the light for days. All are sick. They would have to run. They can no longer manage it, clinging to a vague baggage like a last buoy.

Their shelter was on the left bank of the river, the first stormed by the Russian army. Since the destruction of the bridges, there is no longer any escape route to the rest of Ukraine. Their only chance of survival would be to reach the Russian checkpoint, the Ukrainian military told them. They go up the pier along the Sea of ​​Azov. The checkpoint looms in front of them. “We had no other choice,” recalls Maxim Boyko, 15, one of three orphans at the boarding school. We were put on a bus. »

Direction Donetsk, Ukrainian territory under the control of separatists and Russian troops since 2014. The orphans end up in pediatric hospital number 5. A dozen others are already there, all from Mariupol too. “Children of the cellars,” sums up Ivan. The youngest is 8 years old. For the most part, their parents have one day ventured out of the shelter where they have taken refuge to find something to eat, or at least to try. They never came back.

Sometimes volunteers pick them up for a ride to the playground in the mall. Most of the time they play in the street. “You will continue your studies in another college next week,” the mayor of the city promises them. For her part, a nurse says: “You will soon be welcomed into another home. Nothing happens for weeks. Then the war catches up with them. The sounds of fighting start to swell. This time, the proposal is made to them to leave for a camp near Moscow. They refuse. “We didn’t feel trapped, not comfortable either,” says Ivan. But, above all, they managed to reach Anton Bilay, the director of their college, by messaging. He will come to get them, the orphans do not doubt it. They are waiting for it, obviously.

If you really had to choose a hero in this story, it would be him: the director. With a wife and children, he managed to reach western Ukraine, a sheltered region relatively unscathed from the fighting. There, he tries to recreate his establishment, listing the teachers scattered across Europe.

Neither complaint nor anger

After the evacuation of the three orphans, Anton Bilay had searched for them in vain. It is heartbreaking to know they are alive. Contact is made with Donetsk Number 5 Hospital. Those kids? They will be adopted thanks to a facilitated procedure, he is told. To oppose it, he must meet several conditions. First, prove that the children are indeed under his guardianship. But, in Mariupol which is dying under the bombs, everything has burned down at the polytechnic college, no one can even certify that the building still exists. Anton Bilay finally succeeds in redoing the requested documents. Second condition: the director must present himself to the Donetsk hospital, after validation by the competent authorities in Moscow. For a Ukrainian, going to the middle of the war in Russia and to the occupied zone, to enemy territory, looks like a one-way trip.

Anton Bilay leaves by bus, passing through Poland, Lithuania, Latvia, thousands of kilometers, three days on the road. The border with Russia is crossed on foot since the international sanctions, it takes more than seven hours. Searched, interrogated, mobile phone plugged into a device that shows erased numbers, photos reviewed. Who would he want to feed this story of orphans and boarding school? He can only be an agent of the Ukrainian services.

In Donetsk, one of the orphans found a vague family. They are only two, Ivan and Maxim, to see the director push the door of hospital number 5. They are the only ones, no doubt, not to be surprised.

Anton Bilay and his students have just returned to kyiv for barely three hours. Very pale faces, blue eyes, more like a child than a teenager, the two orphans recount their hundred days through the war, without complaint or anger. The most moved is him, Anton Bilay. His hands are shaking, his knees are dancing. Of the 569 college students, there is still no news of 70 of them.

Since the start of the invasion, 2,162 Ukrainians without parents have been transferred to Russia or the occupied territories of Donbass in often very different circumstances, according to Ukrainian Deputy Prime Minister Iryna Vereshchuk. Only 23 have returned to Ukraine. Among them, the two boys from the boarding school.

Legislative 2022: record abstention in the West Indies, the second round...

In Ukraine, the hundred days of war of the orphans of...