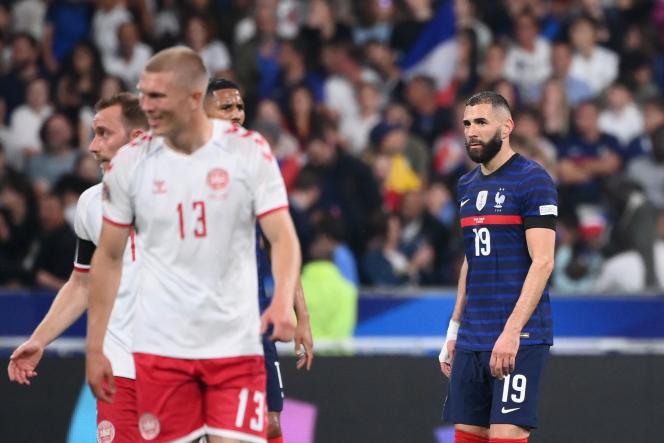 The title holders of the League of Nations are not starting this third edition in the best way. The Blues, deprived of Didier Deschamps, bereaved by the death of his father, lost at the Stade de France against Denmark (2-1). The 20-game unbeaten streak (in regulation time) that began on November 14, 2020 came to an end in the dying minutes of the game.

After a soporific first period, like the confrontation between the two teams at the 2018 World Cup (0-0), France had nevertheless opened the scoring at the start of the second period. Karim Benzema has once again shown why he is the ultimate favorite for the next Ballon d’Or. Served on the right side by Kingsley Coman, he erased with ease and elegance two Danish defenders to adjust Kasper Schmeichel after a relay from Christopher Nkunku (1-0, 51st).

But after the hour mark, Denmark overturned the game, taking advantage in particular of the defensive largesse of the Blues, which offered too much space in the counter-attack. An incoming, especially, made the difference. Nine minutes after coming into play, the former Bordeaux player Andreas Cornelius took over with the flat of the right foot a subtle service from Pierre-Emile Hojbjerg to equalize (1-1, 68th).

It was Cornelius again who came to shower the French team just before the end of regulation time. Starting at the limit of offside, the striker resisted the return of William Saliba and surprised Hugo Lloris with a heavy shot under the bar (2-1, 88th). France was stunned. She could regret the post found a few minutes earlier by N’Golo Kanté (81st). But the warnings had previously been numerous for the Blues, Lloris saving the house twice in front of Skov Olsen and Eriksen (72nd and 86th).

Beyond the defeat, ultimately of little importance in this competition, Didier Deschamps will have reason to worry about the state of health of his flock. Hit in the knee just before the break, Kylian Mbappé was replaced at half-time “as a precaution”, said Guy Stéphan at the microphone of M6. At the hour mark, it was Raphaël Varane’s turn to leave his partners, visibly injured in the thigh. His exit, while the Blues were still leading 1-0, is certainly not unrelated to the defensive mistakes of his team.

“Kylian has a knee problem, the exact nature of which I don’t know, he’s with the doctor, he’s going to have some tests,” assistant coach Guy Stephan said. “He told me he couldn’t go on. You shouldn’t take any risks.” As for Raphaël Varane, he has “a muscle problem behind his thigh, he felt pain. Like Kylian, there will be additional exams” on Saturday, Stéphan said after the meeting. “It seems fair to me [for them] to play in three days,” he added.

The French team, title holders in the League of Nations, are due to travel to Split on Monday to face Croatia, before extending their trip to Vienna to challenge Austria on June 10. The last stage of the international season will end on June 13 in Saint-Denis against Croatia.

News Editor - June 4, 2022 0
His place on the yellow sofa remained empty, but everyone thinks only of him. Taken by his new duties as minister, Stanislas Guerini could...