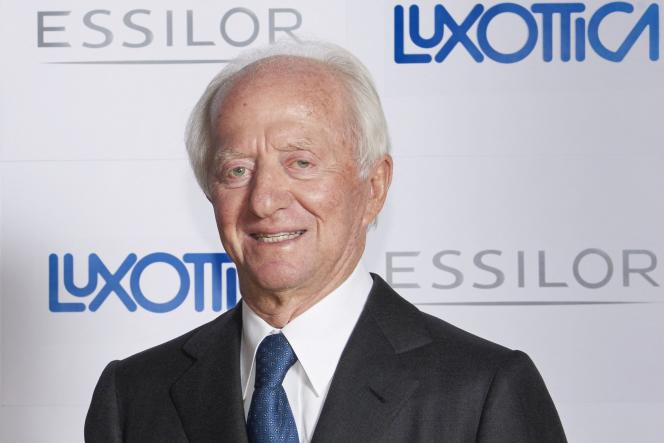 Leonardo Del Vecchio, Italian billionaire and chairman of the board of directors of the Franco-Italian eyewear manufacturer EssilorLuxottica, died at the age of 87 in Milan, the group announced on Monday June 27 in a press release, adding that the board of directors administration would meet to decide on the next steps.

The entrepreneur had been in intensive care for several weeks at the San Raffaele hospital in Milan, according to the AGI news agency. “Del Vecchio was a great Italian”, an “example for today and tomorrow”, reacted on his Twitter account the European Commissioner for the Economy, Paolo Gentiloni.

The entrepreneur, born in 1934 in Milan, had resumed his place in the executive of the Luxottica group, the company that owns the Ray-Ban brand, in September 2014, after the departure of Andrea Guerra, 48, the director general.

From the orphanage to the management of Luxottica

The youngest of four siblings, he was 7 years old when his father, a fruit and vegetable seller, died. His mother entrusted him to the Martinitt orphanage in Milan to learn a trade.

He was 15 when he started working in a cup and medal factory, whose owner encouraged him to enroll in the Brera Museum Academy. He settled in 1968 in Agordo (Veneto), where he opened a workshop for spectacle frames. Three years later, this one, which has fourteen employees, takes the name of Luxottica SA. The businessman merged with the French Essilor in 2018.

Today, the company has remained faithful to Agordo, but by taking over the brands Persol, Oliver People, Oakley, Mikli, etc., and manufacturing for Armani, Chanel or Prada, it has changed scale.

Married three times, father of six children, Leonardo Del Vecchio has placed his empire in the Luxembourg financial holding Delfin, which controls 61.35% of Luxottica. Delfin is the largest shareholder in Italian bank Mediobanca and has a stake of just under 10% in Italian insurance company Generali.