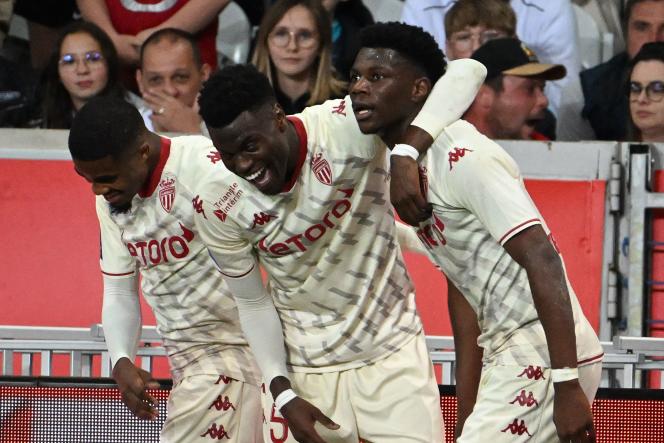 Spring is going well for AS Monaco (ASM). Like last season, the Principality’s football club has had a great end to the season by riding a series of eight consecutive league victories – the best current series in the five major European championships.

In Ligue 1, only Paris-Saint-Germain (PSG) managed such a sequence at the start of the season. A record that Monaco can erase against Brest, Saturday May 14 (9 p.m.), for the 37th and penultimate day.

Thanks to this string of victories, the Monegasques took their place on the podium for the first time this season, following their victory at Lille (2-1) on May 6, just three points behind Olympique de Marseille. (OM), second. To the point of being able to openly dream of the Champions League for next season.

“It has become very complicated to hope for a place in the Champions League, we must not hide our face”, said Monegasque central defender Benoît Badiashile (21) after the 28th day, in March, when his team (8th) was nine points behind third place. “I never said that the podium was not possible,” notes meanwhile, for Le Monde, Belgian coach Philippe Clement (48), who arrived in January to replace Croatian Niko Kovac.

Failure in the Europa League, “a bad for a good”

Before the start of spring, however, the situation of the ASM was not glorious. Eliminated in the semi-finals of the Coupe de France by the future winner, Nantes, and in the round of 16 of the Europa League by the Portuguese of Braga, Monaco sank into crisis.

According to information from L’Equipe, the owner and Russian president of the club, Dmitri Rybolovlev, wanted to separate from his vice-president, Oleg Petrov, from the sports director, Paul Mitchell, but also from the coach, Philippe Clement.

“We heard about this paper on the morning of the match against PSG”, on March 20, vice-captain Axel Disasi (24) told Le Monde. “The reaction from the team has been very good. “ASM had beaten PSG (3-0), launching its positive series. “I don’t know if we can take this game as a trigger, but we showed that even in a bad period this team had a lot of qualities”, continues the player.

Paradoxically, the failure in the Europa League “was a blessing in disguise, even if we had the ambition to do better”, admits the vice-captain. “We had more time to prepare for games, to rest, to put things in place. »

Philippe Clement was finally able to impose his mark on the game and the life of the group. Very quickly, he set about strengthening cohesion. “I saw, at one point, that they were a bit distant, there was no connection between the different groups in the locker room,” he slips. The Belgian coach organizes a paintball, a barbecue and installs, at the Turbie training center, a basketball hoop, table football and ping-pong tables. “Thanks to these activities, we create certain links, we get to know the person in front of us a little more”, confirms Axel Disasi.

In the field, “the coach brings a lot of calm and patience”, explained midfielder Youssouf Fofana on the RMC Sport website in mid-April. “I saw that there was a lack of tranquility when the circumstances were not favorable, analyzes Philippe Clement. Players were getting nervous, frustrated and wanting to force things. »

The coach, triple Belgian champion with Genk (2019) then FC Bruges (2020 and 2021), relies on a stable starting lineup, unlike the permanent rotations of his predecessor. His starting team is largely that of last season.

Monaco also benefited from the return of Aleksandr Golovin (25), Youssouf Fofana (23), who has regained his level alongside his midfield accomplice, Aurélien Tchouaméni (22). Wissam Ben Yedder continues to panic the counters (21 goals, second top scorer in Ligue 1 behind Kylian Mbappé).

Best defense of the season

Defensively, ASM has turned a corner. With thirteen goals conceded in the last seventeen meetings, the club of the principality is the best defense of 2022. Consequence of a change of system and a reformed duo between Benoît Badiashile and Axel Disasi. “It’s very important to have a team that defends well,” relishes Philippe Clement. I want an offensive game, and we do it, but the defensive organization must remain. »

Above all, since this winter, the rock club can count on the Brazilian Vanderson (20 years old). The right-back or midfielder, who arrived in January from Grêmio Porto Alegre (Brazil) for around 11 million euros, quickly made himself indispensable by scoring his first goal after only three games in his new colors.

“It’s a real revelation, he acclimatized quite quickly. He energizes the right side”, analyzed this week, on RMC, Jérôme Rothen, former player of the club between 2002 and 2004. “He brought us a lot of fresh blood, creativity, racing”, confirms Axel Disasi.

Monaco also exudes physical strength. “Physically, we feel superior to others,” said Aurélien Tchouaméni, before moving to Lille. “It gives confidence, when you know that at the end of the match you still have this energy”, insists Philippe Clement. One of the many explanations for the dynamics of ASM, which wants to succeed in the pass of ten against Brest then Lens (Saturday May 21, at 9 p.m.). The club would thus be assured, at least, of third place, synonymous with Europe.