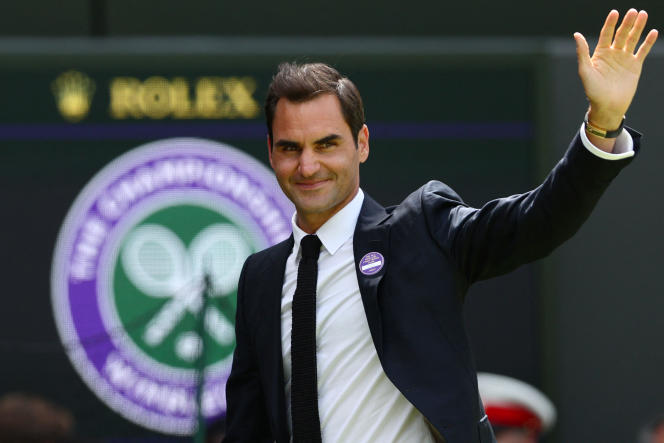 He has not played in competition since his elimination last year in the quarter-finals of the London Grand Slam due to his injured knee. “I hope I can come back once again. I miss Wimbledon. I knew when I left the court last year that the coming year would be tough,” said Roger Federer on Sunday July 3 at a ceremony for the 100th anniversary of Center Court.

“I didn’t think it would take this long to get back on the circuit. The knee hasn’t been kind to me,” added the 40-year-old Swiss, an eight-time Major winner on the grass he first stepped on in 1999.

“I had the chance to play a lot of matches on this court,” Federer recalled. It’s weird to find myself here in another role. But it’s great to be alongside so many other champions. This court gave me my biggest wins but also my biggest losses. My greatest moment was entering the court in 2001 alongside Pete Sampras [whom he had beaten in five sets in the round of 16]. »

Surrounded by a host of winners

“At 17, I played my very first match here and, as we had started late, the match was spread over two days. It was magical and wonderful. I knew that was where I had to be,” commented Billie Jean King.

“It is an absolute honor and privilege to stand alongside legends of our sport, who have paved the way for me and many generations. I’m more nervous than when I’m playing,” said Djokovic, who was due to play his round of 16 later in the afternoon on the same court. “My first image of tennis was when I was 4-5 and I saw Pete Sampras win his fourth Wimbledon. From there, I dreamed of playing here. And the dream came true,” he said.

Roger Federer, in full physical reconstruction after a year without competition, hopes to still be on the world circuit next year, if his recovery goes smoothly in the fall, he explains Sunday in the Swiss daily Tagesanzeiger. “How, when and for what, I don’t know yet. But that would be the idea,” said the Swiss champion, when asked by the Zurich newspaper about his intention to continue next year on the courts, when he turns 41 in August.

The 20-time Grand Slam champion is set to return to the courts at the Laver Cup, which takes place at London’s O2 Arena (September 23-25) and then in his hometown from October 24-30. The Swiss, winner of 103 trophies over his more than twenty-year career, has only played six games in 2020 and thirteen in 2021. He is currently ranked 50th in the world.