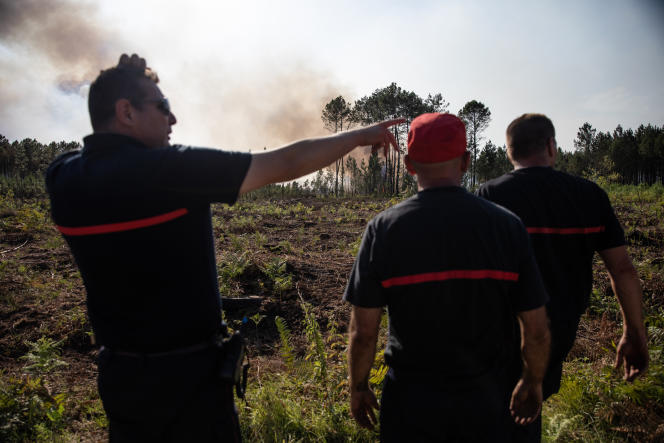 Emmanuel Macron will visit Gironde on Wednesday July 20 “alongside firefighters, civil security personnel, law enforcement, elected officials and all those mobilized” against the gigantic fires, announced Tuesday the Elysee. The president, who will be accompanied by the Minister of the Interior Gérald Darmanin, will make this trip in the afternoon after the Council of Ministers.

“For more than a week the mobilization, solidarity and commitment of all the living forces of the nation mobilized on these fires are exceptional and exemplary”, underlined the Elysée. Emmanuel Macron is expected Thursday in the Hautes-Pyrénées to attend the 18th stage of the Tour de France, after going to a sports center in Tarbes.

“Today (Tuesday), we still have a lull”, declared at a press conference in Langon the prefect of Gironde and New Aquitaine Fabienne Buccio, “it is an important day, a day of calm but be careful, it’s not over. The forecast calls for warm temperatures and not much rain,” she added.

“We have a much lower progression” of the two lights of Landiras, 40 km south of Bordeaux, and La Teste-de-Buch, in the Arcachon basin, according to the prefect. “Today is very important because we were able to work on the defense against fire. We were able to really refine, move forward, create important firewalls. We will continue “. According to a latest assessment, 7,000 hectares were destroyed in La Teste-de-Buch and 13,300 in the Landiras sector, “without any burned house, no victim. Only one individual garage burned down,” Ms. Buccio added.

At the foot of the Dune du Pilat, the fire took away the five campsites evacuated of their 6,000 occupants on July 13, including that of the Dune-Les Flots Bleus, immortalized by the films “Camping”. “Patrick is crying,” tweeted actor Franck Dubosc, who plays the main character, Patrick Chirac.

“We had a normal day compared to yesterday” Monday, an intense heat wave day, “we managed to contain the fire, to control it, to annoy it. We manage to get results, it’s very motivating for the firefighters, “continued the prefect.

About 2,000 firefighters, from all over France, and significant air resources (8 Canadair and 2 Dash) were mobilized on Tuesday for these fires which “have been and will remain mega fires”, according to Commander Sébastien Castel, Commander deputy of Codis 33. During a press briefing in La Teste-de-Buch, three districts of which had been evacuated the day before, the sub-prefect of Arcachon Ronan Léaustic spoke of a “foot-to-foot presence” of firefighters .

The “term of guerrilla warfare is completely appropriate,” said Colonel Fabrice Haulas, head of the South-West territorial group of firefighters, “since indeed, once we have a fairly tenuous interface, we have to go house by house, neighborhood by piece “

Finally, the day after their evacuation from the Teste-de-Buch zoo, some 370 animals were gathered at the Pessac zoo, near Bordeaux, an operation “unique in its kind”, according to Rodolphe Delord, president of the association. French Zoological Parks (AFdPZ) on the job.

In the transport, eight animals, “small monkeys, a parrot, an otter died because of the heat”, according to the director of the Beauval zoo. The other animals were to be distributed to other zoos. “They will not be visible to the public. They will be watered, fed, before returning to La Teste when the conditions are favorable,” he said. The larger ones – elephants, hippopotamuses, etc – remained at La Teste, with carers “to reassure them”.

News Editor - July 20, 2022 0
Emmanuel Macron will visit Gironde on Wednesday July 20 "alongside firefighters, civil security personnel, law enforcement, elected officials and all those mobilized" against the...

The Macron camp multiplies gestures towards LR to hope to obtain...