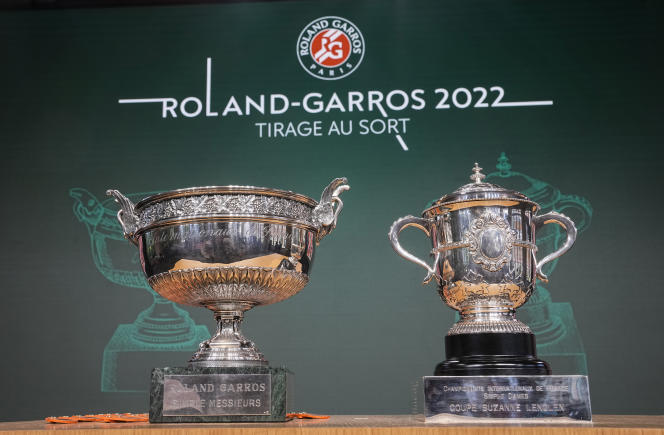 Novak Djokovic, Rafael Nadal and the young phenomenon Carlos Alcaraz, the three main favorites, were paid in the same half of the Roland-Garros table after the draw carried out on Thursday May 19.

Djokovic, world number one and holder of the trophy, could face Nadal, thirteen times winner of the Parisian Grand Slam, in the quarter-finals. The winner would potentially meet Alcaraz, at the gates of the top 5 at 19, in the semi-finals of the tournament, which begins on Sunday. The Serb is looking for a 21st Grand Slam trophy, which would allow him to equal the record held by Nadal since his coronation at the Australian Open in January.

“We have a very dense game with at least two of the big favorites,” said Amélie Mauresmo, who became tournament director at the end of 2021. “Rafael Nadal and Novak Djokovic, for me, are still ahead. Seeing them potentially meet in the quarter-finals is extremely early. I don’t know if I would put Carlos Alcaraz right behind them. »

For now, the latter’s best Grand Slam result is a quarter-final reached at the US Open last September.

Tsitsipas and Medvedev in the other half of the table

Djokovic, who will turn 35 on Sunday, will begin his fortnight against Japan’s Yoshihito Nishioka. The Mallorcan will start against Australian Jordan Thompson. Before potentially joining Djokovic, Nadal could meet the returning Stan Wawrinka in the second round, why not the unpredictable Fabio Fognini in the third round, then Félix Auger-Aliassime (9th). The road seems clearer for the world number one, promised to Diego Schwartzman (16th) or Grigor Dimitrov (20th) in the round of 16.

Alcaraz, who won his first two Masters 1000 titles, in Miami in early April and in Madrid in early May and has also had success in Barcelona in the meantime, will be up against a player from the qualifying in the first round. He could meet another young talent, the American Sebastian Korda (21, 30th), in the third round, then in theory, Cameron Norrie (11th) in the eighth, and the world number three, Alexander Zverev, in the quarter-finals.

The second half of the table is less raised and seems favorable to the outgoing finalist, Stefanos Tsitsipas (4th). The Greek inherited as potential opponents in the quarters from the Norwegian Casper Ruud, then in the semi-finals from his compatriot Andrey Rublev (7th), or from the world number two, Daniil Medvedev. Not a fan of clay, the latter was beaten by Richard Gasquet in Geneva for his return after the operation of a hernia in early April.

On the French side, the Blues will have to get rid of a top seed from the start: Hugo Gaston will face Alex De Minaur; Jo-Wilfried Tsonga, for his farewell, will be opposed to Casper Ruud; Frances Tiafoe will stand in the way of Benjamin Bonzi and Quentin Halys will have to achieve a feat against John Isner. Corentin Moutet did not fall on a seed, but on a former winner in the person of Stan Wawrinka, who won the tournament in 2015.

In the women’s draw, world number one Iga Swiatek, on a series of 28 consecutive victories and a big favorite, risks meeting Simona Halep, winner of Roland-Garros in 2018 and ex-world number one, from the round of 16. If she crosses the Romanian obstacle, Paula Badosa (3rd), Aryna Sabalenka (7th) could be waiting for her in the last four.

The second half of the table, with the Czech Barbora Krejcikova (2nd), outgoing champion but stopped since February (elbow), and Maria Sakkari (4th), could smile at the Tunisian Ons Jabeur (6th), recently victorious in Madrid and finalist in Rome.