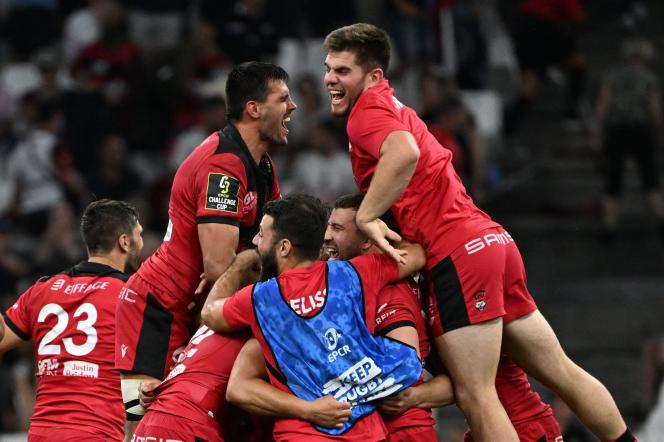 Lyon, carried by a Baptiste Couilloud at his best level, won the first European title in its history by outclassing Toulon (30-12), Friday May 27 in Marseille, in the final of the European Challenge.

Baptiste Couilloud at the maneuver

Once again, playing almost at home did not succeed at the Rade club. As in 2010 in Marseille already, as in 2020 in Aix-en-Provence. And, like two years ago, the Toulonnais missed their start: in the Maurice-David stadium, Bristol had then taken them by the throat at the start, with a try from the first minute. At the Vélodrome, that of Baptiste Couilloud was this time canceled by the video. But the penalty fell for good shortly after when the scrum half took advantage of an interception by Jordan Taufua on a hazardous pass from Sergio Parisse (8th).

He was also involved in the other refused try, that of Davit Niniashvili (40th 1), showing all his vista by playing a penalty quickly in the hand and then admirably sending the young Georgian winger into the in-goal. Carried away by Couilloud, child of the city and the club, the Lou made short work of the RCT, suffocated by the intensity put by the men of Pierre Mignoni.

It must be said that the premature exit of Gabin Villière (31st) or the yellow card collected by Aymeric Luc (46th) disturbed Franck Azéma’s protégés, as much as their missed tackles or the difficulties of Eben Etzebeth. The temporary exclusions of Léo Berdeu (63rd) and Charlie Ngatai (73rd) did not change anything, nor did the late try by Cheslin Kolbe (74th). Mignoni has played a terrible trick on his former and future club. He will join the RCT in the offseason. But he will be able to land on the Rade this summer with the feeling of accomplishment.

“Winning a title validates a lot of work. A title is important in building a club. It would be great for the future, it would allow the players to realize their potential, ”assured the Lyon manager on the eve of the final. “For the club, for the Lyon region, it’s important. We would be the first team to win a title. It’s important,” he continued. He was heard. Apart from the OL women’s team and its eight Champions Leagues, this is the first men’s title for the capital of Gaul.