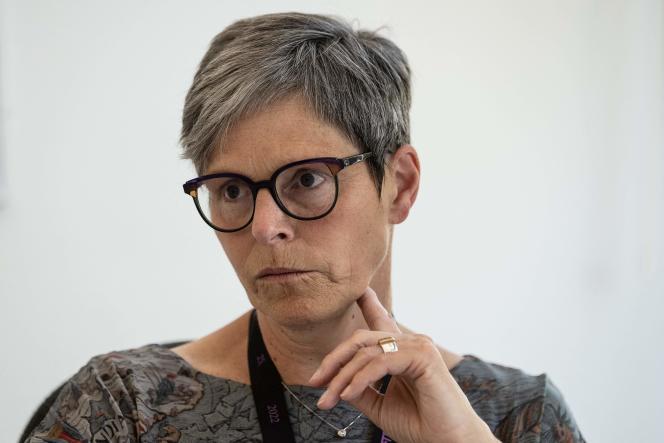 His position had become untenable. Accused of complacency towards anti-Semitism, the boss of Documenta in Kassel (Germany), Sabine Schormann, was dismissed. In a press release published on Saturday July 16, the supervisory board of this major five-year contemporary art event announced that it had reached an agreement with its general manager to terminate her contract, adding that a temporary management would take over the interim. until a successor is designated.

At the heart of the controversy: a fresco by the Indonesian collective Taring Padi, entitled People’s Justice. Twenty meters long, it was to be a centerpiece of the fifteenth edition of Documenta, which opened on June 18 and is due to end on September 25. However, it was only shown for two days, as the Israeli embassy in Germany and several Jewish associations immediately demanded – and obtained – its removal. The reason: the presence, among the figures, of a soldier with a pig’s head wearing a Star of David and a helmet of the Mossad (Israeli secret service), as well as that of a man ticking all the boxes of an anti-Semitic caricature, from the sharp teeth to the pointy ears, to the big cigar on the lips.

A “just and necessary” departure

In its Saturday statement, Documenta’s supervisory board said it was “deeply appalled” that a work containing such “clearly anti-Semitic motives” had been deemed worthy of exhibit. He also felt that “a lot of trust was lost because of the way the crisis was handled.”

After the removal of the controversial fresco, Sabine Schormann offered her “solemn apologies”, assuring “not to have identified any anti-Semitic images during the installation” of this work. However, she struggled to make herself heard. Already at the beginning of the year, the Documenta team was criticized for having invited the Palestinian collective The Question of Funding, accused of supporting the Boycott Divestment Sanctions (BDS) movement, which advocates a boycott of Israel. in solidarity with the occupied Palestinian territories. Two years after the Bundestag labeled BDS as “anti-Semitic,” some saw the invitation as a form of provocation.

During the weekend, the reactions were linked to greet the sidelining of Sabine Schormann. A “fair and necessary” departure, declared the Federal Minister of Culture, Claudia Roth, in particular to the daily Frankfurter Rundschau.

For many observers, however, the dismissal of Documenta’s general manager should not raise undue hopes. More than that of people, the issue, they believe, is that of governance. In other words, the way decisions are made and how power is distributed within this demonstration, the first edition of which took place in 1955, with the stated objective of rehabilitating artists qualified as “degenerate” by the Third Reich.

In its statement on Saturday, Documenta’s supervisory board promises “specialized scientific support”, made up of experts “specializing in questions of anti-Semitism, postcolonialism and art history”. It would be up to them to analyze the “structures and receptions” of the institution, the statement said.

Will these promises be enough to put out the fire and turn the page? Asked by the daily Bild, the director of the Berlin branch of the American Jewish Committee, Remko Leemhuis, accused Documenta officials of “still not having understood the problem”, citing “accusations of anti-Semitism when they should, in his view, have spoken very clearly of “anti-Semitic caricatures” about the figures represented in the fresco of the Indonesian collective. A point of view shared by the president of the Central Council of Jews in Germany, Josef Schuster, for whom the departure of Ms. Schormann “should have taken place much earlier”.