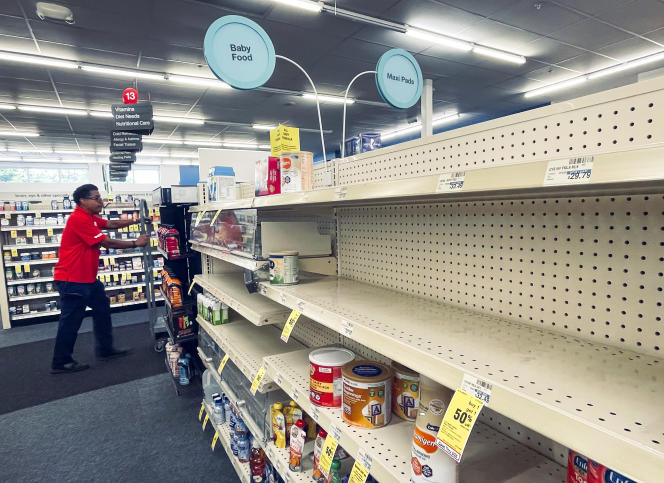 The announcement was eagerly awaited to resolve a serious supply crisis that has been going on for several months. The American company Abbott announced on Saturday, June 4, that it was restarting a large factory located in Michigan, whose prolonged closure is at the origin of a shortage of infant milk affecting all of the United States.

The world’s leading power was already experiencing supply problems linked to the Covid-19 pandemic when Abbott announced in February a recall of products suspected of having caused the death of two infants, as well as the closure of its factory.

The manufacturer says the factory, after meeting conditions set by the US Federal Food and Drug Administration (FDA), will start selling one of its products, EleCare hypoallergenic milk, from around June 20. . Abbott, which controls 40% of the baby milk market in the United States, assured that it was “working hard” to also relaunch the production of another brand very popular with American families, Similac, as well as the rest of its range.

“We understand the urgent need for infant formula and our top priority is getting safe, high-quality milk to families across the United States,” reads the statement released by the company.

The FDA had described serious safety problems at the affected plant. “Frankly, the results of the inspection [of the site] were shocking,” Robert Califf, head of the agency, testified during his hearing in Congress on May 25. The group, itself, confused in apologies during this same hearing.

To deal with the shortage, the Biden administration, accused of having reacted too late, set up an airlift to bring in tons of baby milk produced abroad by military planes.