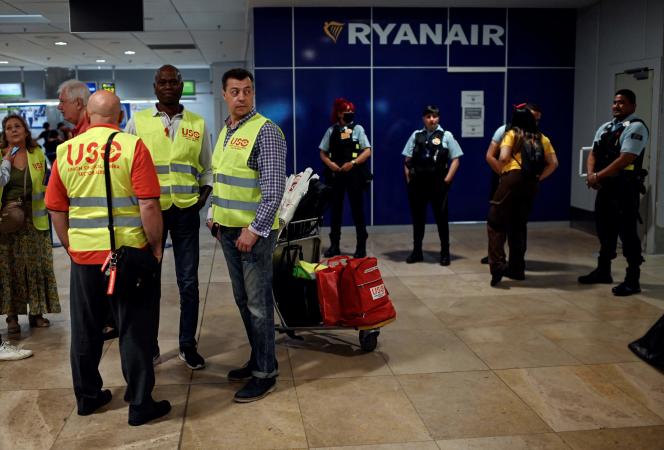 The European sky was slightly disturbed on Friday June 24 by a strike at Brussel Airlines and Ryanair at the start of the summer season. Employees say they are under pressure in the face of the sudden resumption of air traffic.

At Ryanair, several European unions of hostesses and stewards called to stop work from Friday in Spain, Portugal and Belgium, then from Saturday in Italy and France. In Belgium, this protest movement forced the low-cost Irish company to cancel 127 flights between Friday and Sunday departing from and arriving in Charleroi, where most of its activity is concentrated.

The company will only be able to ensure in this airport between 30% and 40% of its planned activity, explained to Agence France-Presse (AFP) a spokesperson for Brussels South Charleroi Airport, the company which operates the airport.

This social movement is coupled in Belgium with a strike at Brussels Airlines (Lufthansa group) scheduled until Saturday. The company announced earlier this week the cancellation of 315 flights to Brussels-Zaventem from Thursday to Saturday.

In Portugal, the strike at Ryanair had a more limited impact, with two flights canceled only on Friday morning, according to the SNPVAC union. The movement should continue until Sunday.

In Spain, where Ryanair employs 1,900 people, however, no flight has been canceled, except for connections with Belgium, the Irish company having engaged in a showdown with the unions on the issue of minimum service.

The Spanish Ministry of Transport decided on Thursday to apply a minimum service of up to 82% of flights to certain destinations, and said it wanted to combine “the right to strike” with the “interest of travelers”. But, according to the unions, Ryanair has decided to go beyond these rules, by forcing employees to maintain 100% of its flights, which they intend to challenge in court.

After Ryanair, a strike at EasyJet in Spain

“The company informed employees that all flights were subject to minimum service, threatening them with disciplinary reprisals”, denounced before journalists Ernesto Iglesias, USO union representative at Ryanair. The Irish company “does not respect the law”, said the union official, who is calling for an improvement in working conditions, this group being the only one, according to the USO, not to have a collective agreement in Spain.

In a statement sent to AFP, the company’s CEO, Eddie Wilson, said the strikers were “only looking for confrontation”, recalling having “signed an agreement” on wages and hours with another union. “We operate 2,500 flights a day. Most of these flights will continue to be operated, even if a “Mickey” union strikes in Spain or if the Belgian cabin crew unions want to strike,” the company’s general manager, Michael O’Leary.

In Spain, the strike at Ryanair – the first company in terms of the number of passengers transported in the country – must continue until July 2, the date of the start of the holidays in many European countries. It will be relayed from July 1 by a social movement within the British low-cost company EasyJet: the USO union has planned nine days of strike in one month at the airports of Barcelona, ​​Malaga and Mallorca (Balearic Islands).

These strikes come as air traffic has seen a meteoric rebound in recent weeks, mainly in low-cost airlines, due to the lifting of most travel restrictions linked to Covid-19. This rapid restart has caused difficulties at many airports, and some companies are finding themselves forced to cancel flights due to a lack of staff.