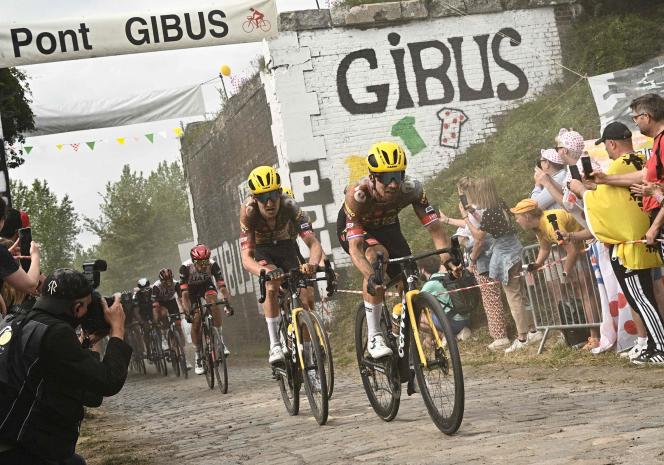 At just one and a half years old, little Georges has other interests than dad’s good work. But in a few years no doubt, Wout van Aert will wonder where to start to tell the son about this funny 5th stage of the Tour de France 2022.

Let’s sum it up for him. This Wednesday, July 6, the Belgian fell in a roundabout 95 kilometers from the finish, failed to finish five minutes later in the trunk of a Dutch team DSM car for having forgotten to look ahead, then saw his own formation, Jumbo Visma, offer the most improbable sequence of the Tour since the jogging of Chris Froome in the Ventoux in 2016, thanks to a chaotic change of bike from the Dane Jonas Vingegaard.

And otherwise ? Wout Van Aert saved his yellow jersey for thirteen seconds in the face of an American climber of Iroquois descent, Neilson Powless, not particularly in his comfort zone with eleven cobblestone sectors on the menu. “I was surprised to learn that I kept the yellow jersey, I was so at the back,” admitted a Van Aert, well shaken by his misadventures.

Neilson Powless could have taken the hit. After all, he was still the winner of the day and leader of the general classification less than 500 meters from the line. The EF Education Easy-Post runner delivered a lesson in American positivity. Yes, he loved his first day on the farm roads of the North. “My hands didn’t hurt too much, I was pretty comfortable, I didn’t get a flat tire…I felt like I was floating on the cobblestones. I achieved my goal of being in the breakaway before all the mess and I even managed to grab a few places in the general classification, which is a small bonus. »

But the happiest man in front of the old pit of Arenberg, where the finish was judged, is called Simon Clarke. In January, the Australian was still unemployed despite a respectable record of service. The Israel-Protech formation should not regret having reached out to “an old man” of 35 years. Starting in a breakaway of six strong (including the eternal Danish fugitive Magnus Cort-Nielsen), the native of Melbourne was ahead of the Dutchman Taco van der Hoorn (Intermarché-Wanty Gobert) by a gut in the sprint.

After the beautiful popular siesta of the Danish long weekend, this 109th edition of the Tour de France has suddenly changed gear with the 157 kilometers between Lille and Arenberg Porte du Hainaut. And again, logistically, the organizers had not gone so far as to send the runners into the mythical gap, close to 300 meters from the finish.

Not worth it. The stage simmered by Thierry Gouvenou was quite salty. “There will be more time to lose here than on the mountain stages,” the technical director of the race announced to La Voix du Nord in November 201. Primoz Roglic can attest to that. The Jumbo-Visma leader lost 2 min 09 sec to his compatriot and rival Tadej Pogacar and thirteen seconds less to his own teammate, Jonas Vingegaard, 2nd in the Tour in 2021.

And this is perhaps the most annoying thing for his ambitions. Is Primoz Roglic still the Jumbo’s protected rider? On the side of the management of the Dutch team, we still have too much headache to give a definitive answer. 35 km from the finish, however, it was Jonas Vingegaard who stole his “super-unlucky” costume: following a puncture, the latter borrowed the mount of the too tall Nathan Van Hooydonck, got off, Steven Kruijswijk handed him his, everyone panicked and the Dane finally left with a bike given by his sporting director.

But “the shitty day” for the Jumbo – according to Wout van Aert – continued ten kilometers further. Perfect on the cobbles, Primoz Roglic was still in the wrong place at the wrong time when Caleb Ewan (Lotto-Soudal) hit a bale of straw. A passage on the ground and a dislocated shoulder put back in place by him on the armchair of a spectator later, he left delayed, the scoumoune glued to the wheels. “I don’t know what state I’m going to be in to continue,” he slipped in front of his team’s bus on arrival. For the moment, I do not tell myself that I lost the Tour, I am not there yet in my head, I will try to recover. »

Far from the misfortunes of his compatriot, Tadej Pogacar (7th) did not need anyone to make the mark in the middle of the beet fields. On this 5th stage, his UAE team seemed to go into battle with bows and arrows against teams like Jumbo and Ineos Grenadiers who came with the big artillery. But when Radio Tour listed the names of classics specialists who were dropped (Mathieu van der Poel, Yves Lampaert, Kasper Asgreen), the designated culprit was the double reigning winner of the Tour. “I had a really good day, I felt good on the cobbles,” he said.

Some “Pogi” in the text. Easy on the bike, concise in words. Only the Belgian Jasper Stuyven (Trek-Segafredo) managed to follow the one who finished 13th in Paris-Roubaix… juniors, in 2016. If the white jersey of the best youngster leaves Hainaut with a meager savings of thirteen seconds on riders like Jonas Vingegaard, Aleksandr Vlasov, Romain Bardet, David Gaudu, Adam Yates and Daniel Felipe Martinez, he continues to hum this little music of invulnerability in the heads of his rivals.

The latter can always hope that the Slovenian glutton will one day lose interest in his collection of yellow tunics to deport his domination over the classics of the North. On Wednesday, the boy was negotiating with the pavement like a potential winner of Paris-Roubaix. Did you say confusing?