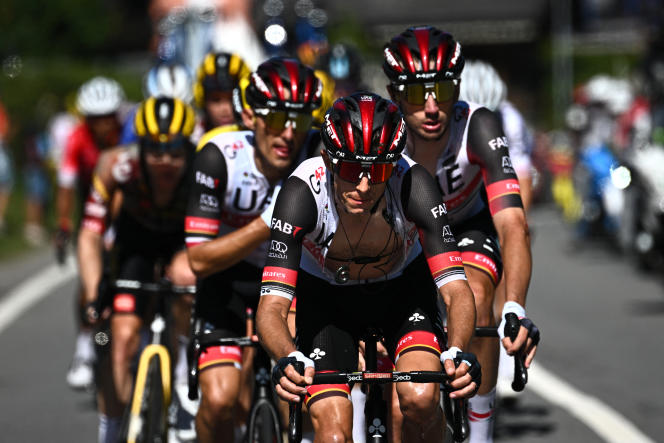 “The Covid can ruin everything on the Tour”, declared Tadej Pogacar after the arrival of the 8th stage, Saturday July 9 in Lausanne. The Slovenian had reason to be worried. Teammate of the double title holder, George Bennett had to leave this Tour de France 2022 after a positive test for Covid-19, the UAE team announced before the start of the 10th stage, Tuesday July 12, in Morzine (Haute-Savoie) .

“Monday evening, George exhibited some symptoms and, according to our protocol, he was tested [with] a positive result. Therefore, he will not start [this Tuesday],” said Adrian Rotunno, the team’s medical director.

The New Zealander is the second positive case of the day after Australian Luke Durbridge (BikeExchange). Above all, his retirement comes on top of that of another Pogacar team-mate, the Norwegian Vegard Stake Laengen, forced to leave the race for the same reason, at the end of the 8th stage.

A total of five riders gave up after testing positive for Covid-19, including Geoffrey Bouchard (AG2R-Citroën) and Guillaume Martin (Cofidis). The whole peloton passed a regulatory detection test on Sunday evening, which gave a negative result for all the riders.

Can Bennett’s forced retirement be a game-changer for the yellow jersey squad, now down to six riders? Transfer from Jumbo-Visma, Bennett (32) was expected to accompany the Slovenian in the high mountains.

Pogacar does not like to lend his yellow tunic, worn since his victory at Longwy, during the 6th stage. “We have a strong team and we will try to control the race,” he said that day. He had kept his promise. His team always rode behind the breakaways, rather than “dropping” the jersey and – temporarily – shifting the weight of the race to a formation.

With almost two more weeks of racing, Tadej Pogacar will have to spare his last five teammates, starting with Brandon McNulty and Rafal Majka, who are in great demand as soon as the road rises. The latter, very precious, also tested positive for Covid-19. But the Polish climber was allowed to start by the doctors, due to a low viral load, as authorized by the new protocol decided by the International Cycling Union (UCI) before the start of this 109th edition of the Tour. .

Pogacar (23) was not born in 1989. That year, Greg Lemond had won the Tour de France with only three team members in the very modest ADR-Agrigel team. Not sure that the yellow jersey seeks to equal or beat this record.