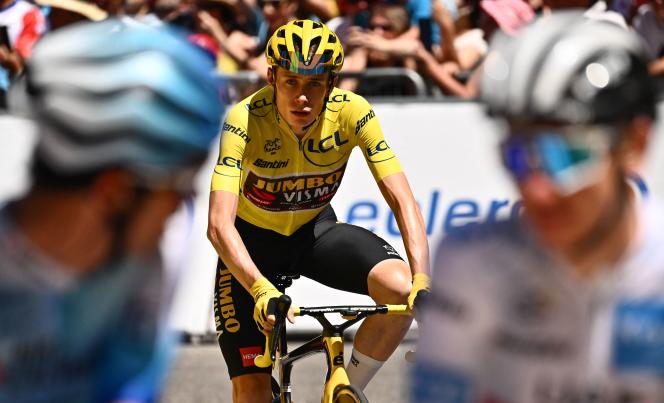 On the Tour, the rest day is often that of the laundry for the followers. On the Jumbo-Visma side, the machine should be running from the evening of this Sunday, July 17. Jonas Vingegaard has a yellow jersey to wash. The Dane arrived in Carcassone (Aude) with a large black stain on his left shoulder, the result of a fall 57 km from the finish during this 15th stage, won in the sprint by the Belgian Jasper Philipsen (Alpecin -Deceuninck).

Vingegaard and his team probably have other concerns than the right wash cycle to adopt. We’re a little rambling, but the transition stages are a bit of the past, as much as the RMO jerseys, the sausage helmets, the Antenne 2 logo and the French in yellow on the Champs-Elysées.

Between Rodez (Aveyron) and the foot of the ramparts of “Carca”, 202.5 km further, the Dutch formation experienced several heat strokes and the mercury – not decided to go below 38 degrees Celsius on the roads of the country of Cocagne and Cathar castles – is not solely responsible. Perhaps not yet warm after six kilometres, Wout van Aert had the funny idea of ​​accompanying the German Nils Politt (Bora-Hansgrohe) and the Dane Mikkel Honoré (Quick-Step) for a 38 kilometer outing before be reminded in the headset.

The green jersey (still fresh enough to finish 2nd) does not know it yet, but he may have to watch his consumption of superfluous effort in the last week. Indeed, the rest of the day will turn to the game of massacre for his training. Touched from the 5th stage, Primoz Roglic ended up throwing in the towel. Despite a tormented back (“I feel like I’m getting stabbed with every turn of the pedal”), the Slovenian had turned into a dedicated and efficient team member.

64 km from Carcassonne, Steven Kruijswijk tastes the burning macadam without asking. Hit in the right shoulder, the Dutchman gives up and Vingegaard loses his favorite lieutenant in the mountains. And two. In his misfortune and his fall shortly after, the Dane was accompanied by Tiesj Benoot. Handyman of the Jumbo, the Belgian stayed on the ground for a moment before getting back on his bike and finishing this stage in pain.

If the former DSM leaves on Tuesday, after the rest day, Jonas Vinegaard will count on five teammates, like Tadej Pogacar, whose UAE team has been rolling at six since the abandonments due to Covid from George Bennett and Vegard Stake Laengen. The manager of the Emirati formation, Mauro Gianetti, commented on this rebalancing of forces with a certain detachment. “I think the battle is between the general classification riders and it will take the legs: it’s going to be Vingegaard, Thomas, Bardet, Gaudu, Yates… it will be between them and I don’t think it will make a difference”, advances the Swiss.

Perhaps, but on the side of the Jumbo-Visma, concern was sweating profusely. Jonas Vingegaard dispatched his press conference in one minute flat. “I have a few wounds on my left side, it hurts a little but I got up very quickly, I hope it will be okay,” he wants to believe. For his French teammate Christophe Laporte, this black Sunday forces the Dutch team “to be even more united”. “We had a very strong team and I think we can still take things on board. We are going to give the maximum, Jonas is very strong, ”argues the Varois.

But the Dane risks sleeping badly, like on the evenings of a fall day. The heat wave should not help him to sleep. On arrival, some runners had it big and hot on the potato. “There are red alerts in the region, but we are still running,” blows Arkea-Samsic sprinter Hugo Hofstetter. It is us, a little, who accept that. And if we accept that, one day, we’ll drive in 45°C, 50°C, maybe 60°C… After that, it’s like that, no choice. »

The day could have been refreshed by a French victory. Benjamin Thomas (Cofidis) and Alexis Gougeard (B

The track specialist regretted not having been able to count on the help of Gougeard until the end, but in his defense, the latter was a little overwhelmed by the heat. “We got very, very hot. I often looked at the meter at 41°C, 42°C. You really had to eat, drink, not forget to eat too. I don’t know how many cans we drank during the day, but it’s huge, “says the Normand.

A few meters from him, Tom Pidcock (Ineos Grenadiers) rushed into a Carcassonne fountain with the same speed as in his descent from Galibier. The Briton came out with his shorts soaked, but almost refreshed.

News Editor - July 17, 2022 0
On the Tour, the rest day is often that of the laundry for the followers. On the Jumbo-Visma side, the machine should be running...