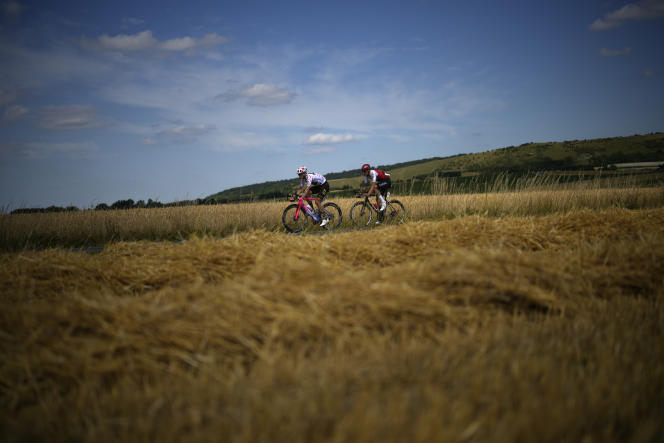 Don’t be fooled by his Occitan accent. Anthony Perez was well on his land. Finally, more exactly on that of Cofidis, his team since 2016. Tuesday July 5, the Toulousain had been designated by his formation to take the breakaway of the day during the 4th stage of the Tour de France, between Dunkirk and Calais (171 .5km) . “We’re at home, we have to show the jersey,” he announced before the start a few meters from the Dunkirk beach.

Promise kept. On the attack as soon as the flag was lowered, Anthony Perez covered 160 kilometers in the lead, including 125 in “shared accommodation” with the incomparable Dane Magnus Cort Nielsen (EF Education Post). The wearer of the best climber’s polka dot jersey has definitely not wanted to cut the fat with his colleagues in the peloton since the big start in Copenhagen.

Unsurprisingly, the Cofidis adventurer was caught about ten kilometers from the line. His team’s first win since 2008 will have to wait a bit longer. “We were rather hoping for a breakaway between three and five riders, admitted Cédric Vasseur, general manager of the northern team at the end of the stage. Anthony showed that he was strong, he did not have much to reproach himself with the Jumbo which rolled behind. His rider will console himself with the title of combative of the day. You don’t choose your honors on the Tour.

Except maybe when your name is Wout van Aert. Tired of his three second places since the start of this edition, the handyman of the Jumbo-Visma is not one to be discouraged. “I had the dream of the yellow jersey for a long time and the green jersey [in the points classification] is one of the big goals of my year, that’s what guided my preparation. But I also like to win races,” he announced on Sunday just before leaving Denmark. Judging by his line crossing on Tuesday, all in arm movements, he had foreseen the blow.

Give the Jumbo-Visma a blackboard and the Dutch team takes care of the rest. His “screw shot” in the Côte du cap blanc-nez (classified in 4th category, the weakest) about ten kilometers from the finish will have been a small tactical and physical masterpiece. “We had planned to attack in this bump, but it really went up very quickly, it exploded all over the place”, explained his teammate Frenchman Christophe Laporte, 3rd at the finish.

On a great day, Wout Van Aert accelerated a few dozen meters from the summit to distance his Danish teammate Jonas Vingegaard, as well as Briton Adam Yates (INEOS Grenadiers) who was still hanging on. “Behind, it took a while to get organized and Wout took quite a lead,” remarked Christophe Laporte. All that remained for the Belgian was to drive very hard to sign his seventh victory on the Grande Boucle in four participations.

Adrien Petit was also not really surprised by the victory of the Belgian “war machine”. “The guy wins at Ventoux, on classics… He is very calm thanks to his team, he struggles less for placement, with respect for the yellow jersey, we give him the place more easily. But hats off and he’s a great guy, ”summarizes the Frenchman from the Intermarché Wanty Gobert team.

Wednesday, stage 5 looks like a “mini Paris-Roubaix”, between Lille and Arenberg Porte du Hainaut. An appointment dreaded by the contenders for the general classification where, according to Jonas Vingegaard, Wout Van Aert should be content with the role of teammate. “I’m not sure of the plan, however, tempered another Jumbo, the American Sepp Kuss, Tuesday morning. Normally we will try to secure for the general classification, but if the opportunities are there and things are under control, he can go and aim for the stage. The ogre is insatiable.