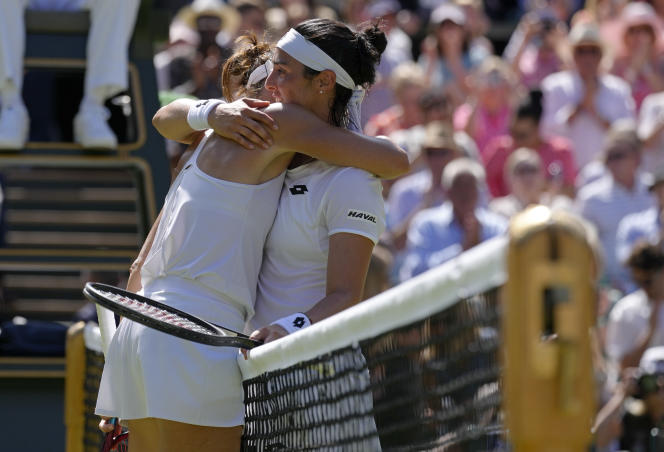 This is her first Grand Slam final, she is even the first player from the African continent to achieve this performance in the Open era. On Thursday July 7, the Tunisian Ons Jabeur, 2nd in the world, qualified for the Wimbledon final by beating in three sets (6-2, 3-6, 6-1) the German Tatjana Maria, after 1 h 43 of effort.

“It’s a dream come true after years of hard work and sacrifice. I’m happy that it’s all finally paying off and that I can play one more match,” said Ons Jabeur, who dropped his first set of the tournament.

Undefeated this year on grass after her title in Berlin two weeks ago, the 27-year-old Tunisian will play Saturday against the Romanian Simona Halep (18th), winner 2019, or the Kazakh Elena Rybakina (23rd).

Ons Jabeur and Tatjana Maria hugged for a long time at the net after the match. “I wanted to share this moment with her because she is truly an inspiration to so many people, including me,” explained the world number two in reference to the successful performance by her opponent, ranked only 103rd at the WTA.

The 34-year-old German, mother of two little girls, the last of whom was born less than a year ago, had never passed the third round of a Major. But Jabeur is a model herself. The first player from the Arab world to reach the quarter-finals of a Grand Slam at the Australian Open in 2020, she climbed two more steps this year at Wimbledon.

“I am a proud Tunisian woman today. I know that in Tunisia it must be madness right now. I just try to be an inspiration as much as possible, I want to see more Arab and African players on the circuit,” she said before leaving Center Court.