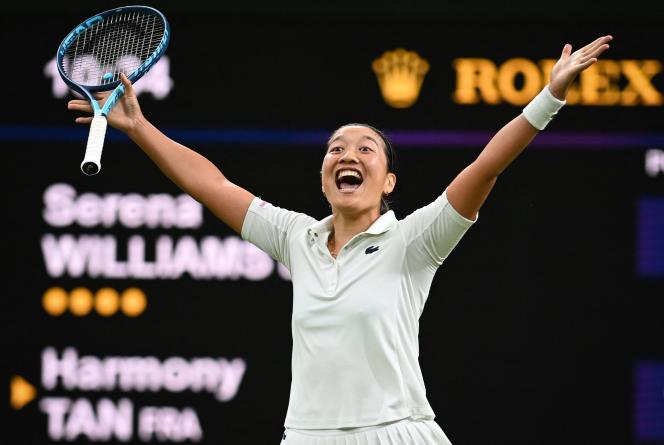 It is probably the best victory of his career. On the central court of Wimbledon, this June 28, Harmony Tan (115th player in the world) beat the seven-time winner of the British Grand Slam, Serena Williams (7-5, 1-6, 7-6 [7]). The 40-year-old returned to competition after a year’s absence, dropping to No. 1,204 in the singles world. In 80 grand slam tournaments, this is only the third time that S. Williams has lost in the first round.

The Frenchwoman, comfortable on the grass, relied on a defensive game, based on regularity. She only conceded 28 unforced errors, against 54 for her opponent of the day. Another quality demonstrated by the 24-year-old Parisienne: her ability to cover a large part of the ground. She covered 8,568 meters during this meeting, against 7,373 meters for Serena Williams. A superior physical dimension, precious, for this 3:11 marathon. In the next round, the licensee of the Tennis Club Boulogne-Billancourt will face the Spaniard Sara Sorribes Tormo, 45th player in the world, faller of Chrsitina McHale (6-2, 6- 1).

“I’m so moved I can’t find the words… She’s a superstar, I’ve watched her so many times on TV that my first Wimbledon, it’s… wow!” commented Tan. “When I saw the draw, I was very scared. It’s Serena Williams, a legend, I was wondering how to play against her and I thought if I already won one or two games, it would be great, “added Harmony Tan, whose coach, Nathalie Tauziat, today 54-year-old faced Serena Williams on the circuit.

Serena Williams running out of pace

Last year, she left Center Court during the match, victim of a thigh injury. Tuesday, back on this same court, Serena Williams went after a disjointed match at the end of which she bowed.

Sometimes borrowed, not always well placed, even a little lost on the court, not knowing whether to move forward or back, not always sure of herself or her shots, she was unable to impose over the length of the match his powerful and intimidating game which made his strength. She did cry out loud to try to relieve the obviously enormous pressure that weighed on her shoulders, but there was too much waste in her game (54 unforced errors against 28 for her opponent).

So she sometimes resorted to attempts at intimidation, with particularly theatrical demonstrations on a few key points like the one that gave her the break and the opportunity to serve for the match in the third set. But in vain. At nearly 41, this may have been Serena Williams’ last singles appearance at Wimbledon. However, in a press conference, she announced that she was “motivated” to play the US Open (August 29-September 11).