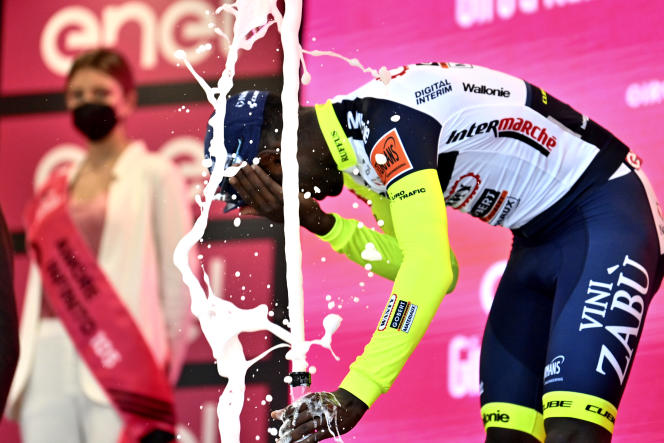 The day after his victory in the 10th stage of the Tour of Italy, Biniam Girmay’s great adventure on the Giro came to an end. The Eritrean runner from the Belgian team Intermarché-Wanty-Gobert was injured in the eye, on the ceremonial podium, by the cap of the bottle of prosecco reserved for the winner.

The 22-year-old cyclist, darling of the peloton since his triumph at the end of March over the Flemish classic Ghent-Wevelgem – the first for an African rider – was participating in his first Grand Tour. Before his victory on Tuesday, he had finished six of the ten stages contested in the top 5.

The Intermarché-Wanty-Gobert team had chosen to wait until Wednesday morning to make a decision on Biniam Girmay’s participation in the Giro. She finally opted for abandonment out of caution.

“The examinations revealed lesions, which require the utmost care and rest,” the team said. His doctor, Piet Daneels, added that hemorrhage had been observed in the anterior chamber of the runner’s left eye.

Other ophthalmological consultations are planned in the short term for the Eritrean, who left the hotel in the morning with his manager, after greeting his teammates and his staff.