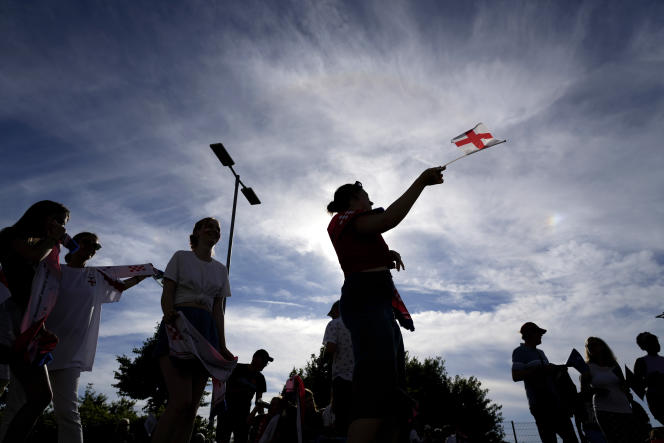 Whatever the sporting outcome, the 2022 Women’s Football Euro is already guaranteed to be a great vintage in terms of stadium attendance. Driven by the first matches of England, the host nation, which were sold out even before the start of the tournament, the Euro broke records. For the opening England-Austria match on July 6, 68,871 spectators were present at Old Trafford (Manchester), unprecedented in the history of the competition.

Three days later, the attendance record for a Women’s Euro match not involving the host country had also been beaten: 21,342 people for the clash between the Netherlands, defending champions, and the Sweden, Olympic vice-champion, in Sheffield. A figure exceeded, on July 17, in the same setting of Bramall Lane, during the match Netherlands – Switzerland (22,596 spectators).

As significant as they are, these figures cannot hide a less enchanted reality. Many posters are struggling to fill half the capacity of the stadiums. While its low capacity (4,700 seats) had been criticized by the Icelanders, the Academy Stadium, home to Manchester City’s women’s team, was not full during Belgium-Iceland matches (nearly 3 800 spectators) and Iceland-Italy (4,000 spectators).

Moreover, the Euro seems to arouse little interest outside the stadiums: in the cities hosting the meetings, the places of festivities struggle to attract the public. On July 10, France-Italy Day, you could, for example, come across Steve and Julie, two volunteers from UEFA, the organizing body of the Euro, leaning against a low wall at the exit of Rotherham station: responsible for informing about the activities planned on the sidelines of the meeting in this city in the north-east of England, they said they were not very much in demand.

And if the New York Stadium in Rotherham was so named in reference to the nearby disused Guest and Chrimes factory, which manufactured the fire hydrants still present in the American megalopolis, a few hours before the kick-off of the match, we was a far cry from the excitement of the “Big Apple”. In the city centre, few elements perceptible to the naked eye suggested that a competition was organised, apart from a small panel with the mention of the four countries (France, Italy, Belgium, Iceland) concerned by the three matches played in the city.

The lack of interest is also palpable through the media coverage of the Euro. National dailies like the Times or the Telegraph give pride of place to politics and the aftermath of the departure of Prime Minister Boris Johnson or the heat wave alert that is raging in the country. However, a peak of 4.1 million viewers was recorded on the BBC during the England-Norway match (8-0).

Fan zones that are not very lively or… closed

But the sporting exploits of the English, undefeated before their quarter-final against Spain, Wednesday July 20, are not enough, for the moment, to cause real enthusiasm. Especially since little is done to create the conditions.

Crossed in the fan-zone of Rotherham, Leon, an employee of the English federation, holds the official stand dedicated to England. Surprisingly, it is impossible to buy jerseys there. “You have to go through the Internet, but the price [75 pounds, or nearly 90 euros] is a real obstacle,” he says.

In Brighton, a seaside town in the south of the country, while the England-Norway match on July 12 took place at 9 p.m., the fan zones were closed at… 6 p.m. “Hundreds of Norwegians without tickets had to look for bars to see the meeting, notes Nick, originally from the city. Not to mention the English who had come from afar and who were also unhappy. »

Crossed a few hours from France-Belgium, on July 14, at Minster Gardens in Rotherham, a grassy square where one of the fan-zones was installed, Imane, a Belgian supporter, expressed her regrets: “During the last Euro in the Netherlands Bas, in 2017, there were initiations to beach soccer, bouncy castles, there was much more atmosphere than today. The Dutch have always been one step ahead in the discipline. »

Fortunately they are present in England! Thanks to the supporters of the Oranje, who show unfailing support for their players, on and off the field, the Euro does not take place in a completely sanitized atmosphere.

Sunday July 17, in the fan zone of Devonshire Green, in Sheffield, the excitement was thus at the rendezvous. A real orange wave converged on the stadium a few hours before the match against Switzerland (4-1 victory).

“A dozen years ago, women’s football was a different sport. Since then, the level has evolved. It became fun to follow,” said Arjan, from Rotterdam. “Since the professionalization of our championship, our level has risen and the country has taken a liking to our players”, adds the one who attended more than 1,000 meetings of the Netherlands, men and women combined.

The presence of the Dutch in the quarter-finals, as well as that of the English, is good news. The England-Spain and Netherlands-France posters should ensure good crowds. And the atmosphere in the streets of Rotherham, on July 23, with the presence of the Oranje tide.