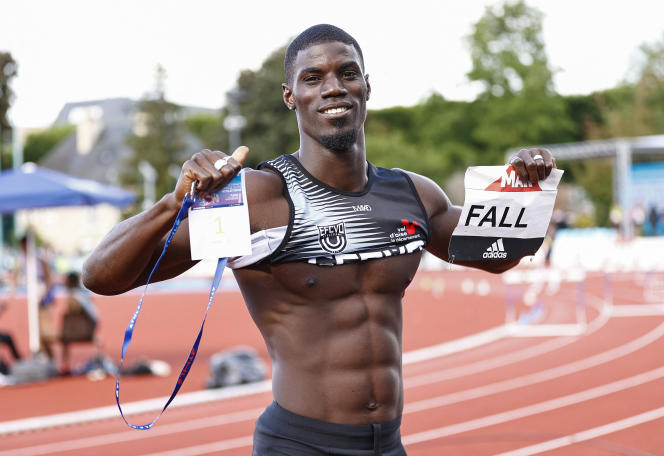 What will Mouhamadou Fall be thinking when he sets off in the fourth heat of the 200m event at the world championships (at 2:26 a.m., Tuesday, July 19, Paris time)? The only representative of the French sprint, entered individually in Eugene (Oregon), is a man on borrowed time. The 30-year-old is threatened with a suspension for breaches of his anti-doping location.

On July 7, when he had already flown to the United States, he was informed by the French Athletics Federation (FFA) of a notification from the French Agency for the Fight against doping (AFLD) for violating the rules for the third time in the last twelve months.

Although he is under threat of a two-year suspension – the rule in this area, in general – the procedure allows the offending athlete to give explanations before the AFLD renders its decision. This is what Mouhamadou Fall did through his lawyer.

The FFA could have decided on preventive action. She chose a kind of judgment of Solomon. “We have no restrictions from the French Anti-Doping Agency for him not to run, but we have made the decision, with the relay officials, that Mouhamadou Fall does not participate in the 4 × 100 meters” , confirmed Romain Barras, director of high performance at the FFA, at a press conference, a few days before the start of the Worlds. The sprinter from Franconville (Val-d’Oise) can, however, participate in the individual event.

This in-between prevents a possible future sanction from retroactively canceling the results of the French relay. “The 200 meters is an event that concerns only me. Even in the event of a possible sanction, it will not reflect on the France team, ”says Mouhamadou Fall.

“It’s part of the life of a top athlete”

For the France team, there is no question of treating him as an outcast. “He will warm up with the group, because he is part of the adventure of the relay”, specified Romain Barras. We could also meet, in recent hours, the athlete, in tricolor uniform, on the campus of the University of Oregon, where the Hayward-Field stadium is located, of which he will walk the track.

Of a rather easy and jovial nature, Mouhamadou Fall was inevitably touched when he came before the media on Saturday. “It’s not easy, but it’s part of the life of a top athlete,” he explained. With my lawyer, we provided them with explanations, and I trust the AFLD to understand what happened. »

A footballer in his youth, the young man converted to sprinting while he was the manager of a shisha bar in his hometown, Persan (Val-d’Oise). It was by organizing races against friends in front of his establishment that he became aware of his burst of speed. A former PE teacher then convinced him to get into athletics later on.

In a few years, he won three times the title of French champion in the 100 meters and twice that of the 200 meters. Its first beginner chronometric references date from 2015: 10.90 seconds and 22.09 seconds. This year, he improved his two personal bests: 10.15 seconds on May 18 in Italy and 20.26 seconds at the Charléty meeting on June 18.

The collective of French sprinters, eliminated early in the semi-finals of the Olympic Games in Tokyo, is not in great shape. Another of its best elements, Amaury Golitin, was temporarily suspended at the end of June by the AFLD for breaches of the whereabouts obligations and for a suspicion of document falsification. He therefore did not make the trip across the Atlantic.

While the two men risk the same final sanction – two years off the tracks – they had also experienced other extra-sporting hazards during the 2021 Olympics. Due to bad behavior, the FFA disciplinary commission of first instance has both sanctioned in December 2021.

Amaury Golitin was sanctioned twice: “prohibition to participate in sporting events organized or authorized by the FFA” for a period of six months accompanied by a total reprieve because of his behavior in Tokyo (criticism of the choices of the head of relay and absence from rallies); six-month ban, including four suspended, for “violent behavior” towards another athlete “on the sidelines of a competition and within a training structure”.

Mouhamadou Fall had been sanctioned with a similar six-month ban with a total reprieve due to absence from relay rallies and threats to refuse selection.

Since the beginning of the year, the sprinter has been training with the group of former American sprinter Dennis Mitchell, in Clermont, Florida. World champion and Olympic champion in the 4 × 100 meters – suspended for two years for a positive testosterone test – Mitchell is notably the coach of American stars Sha’Carri Richardson, Justin Gatlin and Kenny Bednarek.