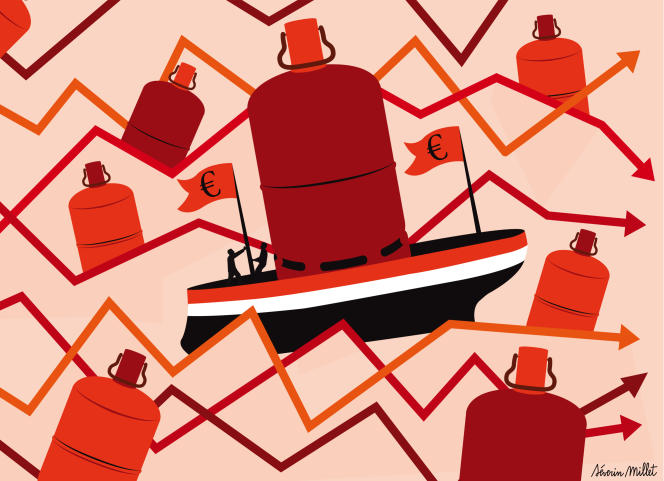 Notice to some 2.8 million French households still subscribing to the regulated sales tariff (TRV) for gas: a quarter of a century after the first European directives, the final stage of energy liberalization is approaching at the very moment when the prices and speculation panicked. The tariff regulated by the government, valid with the historic supplier Engie (ex-GDF) or local distribution companies, will disappear from July 1, 2023. Then, it will be a question of falling back on one of the offers of market that have emerged since the opening to competition. In fifteen years, in the country, they have already captured three quarters of the 10.7 million households that still heat or cook with this molecule.

Engie, of which the State remains the largest shareholder, now has to deal with around fifteen alternative suppliers for residential sites. New gas players, in the forefront of which the electrician EDF as well as the oil companies TotalEnergies (ex-Total) and Eni. The Council of State having judged, in 2017, that the regulated tariff constituted “an obstacle” to the competition desired by the European Union, the Energy-Climate law of November 2019 recorded the imminent extinction of “TRV gas”. As such, it provides for five reminder letters to encourage households to consider choosing a market offer as soon as possible. Change without charge and without notice, it is repeated.

The third recall period was from May 15 to June 15. A mandatory step, but “very unwelcome”, according to the consumer association CLCV (Consumption, living environment). “In a context where the energy markets are hectic to say the least and where a very problematic contractual instability has set in on market offers”, it advises households to remain under the protection of the regulated sales tariff gas rather than venturing elsewhere.

The gas TRV has remained unchanged since October 2021, after a 57% increase over one year. This mechanism is based on the “tariff shield”, a government measure consisting in compensating suppliers in return. It must also have repercussions, by ricochet, on a small part of the market offers. Those indexed to the regulated tariff. They concerned 13% of customers, among individuals, at the end of 2021. But their percentage will grow in the months to come, observers predict. Particularly when the current fixed price market offerings (53% of customers), lasting one to four years, expire. On the other hand, the law prohibits passing or returning to the TRV.

In normal times, the executive revises the regulated gas tariff each month, according to the calculations of an independent administrative authority, the Energy Regulatory Commission (CRE). In the present case, without state intervention, the TRV would still have jumped by 54% excluding tax in June, compared to the autumn. CRE’s calculations are based above all on the costs on the wholesale market, the one where suppliers get their supplies before selling it to individuals.

However, in recent months, European gas prices have been agitated as never before. “The worst crisis in the sector ever,” agrees Julien Teddé, managing director of broker Opéra Energie. The international context has multiplied by five on average the price of a megawatt hour between the first quarter of 2021 and that of 2022, to go from around 20 euros to 100 euros on the Dutch market, a continental benchmark. First, since the summer of 2021 and the end of the confinements due to Covid-19, there have been the effects of a strong economic recovery throughout the world. Then the invasion of Ukraine by Russia, on February 24, and the collateral concerns about Russian hydrocarbon supplies.

In the name of household purchasing power, one of the main concerns of the French, the government now intends to maintain the price freeze throughout the year. Even more, since Emmanuel Macron made the promise to apply it “as long as necessary”, on the occasion of the inter-rounds of the presidential election.

Voices are raised to preserve a regulated tariff. “This legal-administrative tool has greatly facilitated, operationally, the implementation of the “tariff shield””, estimates François Carlier, general delegate of the CLCV association. “Without a regulated tariff, we will enter into a pure market logic without price control and we will sacrifice energy to speculation”, laments Yohan Thiebaux, head of CGT union coordination at Engie. The Communist senators thus asked the government, as early as March, to “renounce the extinction of the regulated prices for the sale of natural gas in 2023”.

Contacted, a government source is careful to dissociate the question of the “shield” and that of the TRV, believing that the executive could just as well continue to apply one without resorting to the other. With the following argument: without being eligible for the regulated sales tariff, the collective heating systems of around 2 million social housing units also benefit from the tariff freeze thanks to a decree published in April, and valid retroactively since the end of the year 2021. “The State pays suppliers an amount in euros per megawatt-hour depending on the difference between the price of the contract and the level at which it wishes to cap it, then the suppliers pay it back on the invoice to the customers concerned”, specifies Naïma Idir , president of the National Association of Retail Energy Operators (Anode), spokesperson for the main alternative suppliers, behind the referral against the regulated gas tariff to the Council of State.

Beyond the economic situation, according to some observers, the disappearance of the regulated tariff risks adding to the general confusion on the energy market. Even though this tariff already depends on market fluctuations, since it retranscribes the gas supply costs, until then it provides a benchmark set by the public authorities. A “price pivot”, like a “beacon in the night”, according to Antoine Autier, head of studies for the consumer association UFC-Que Choisir. At the end of 2021, the comparator of the national energy ombudsman established the annual heating bill for an individual at the regulated rate at 1,481 euros, and that for cooking at 171 euros.

The government replies that the Energy-Climate Law of 2019 guarantees the existence of a reference even in the absence of a regulated tariff. The Energy Regulatory Commission will be responsible, according to the law, for “[publishing] each month the average price of natural gas supply and its evolution for domestic end consumers as well as the average margin achieved by gas suppliers natural “.

The end of the regulated tariff threatens to lead to a “bazaar”, according to the common word of Antoine Autier and François Carlier. “To stand out from each other, a fraction of alternative suppliers might tend to talk nonsense, with pricing claims that are difficult to compare,” warns Mr. Carlier. At the risk, according to him, of “an insane number of disputes” and “absolute conflict” between consumers and suppliers.

For the time being, the regulated tariff guarantees a form of contractual security. With him, “you can rest easy”, insists Mr. Autier. Its disappearance would also complete “the trivialization and total commodification of this energy”, regrets Michel Vakaloulis, lecturer in political science at the University of Paris-VIII-Saint-Denis. Regulated sales tariffs today represent “the beautiful remains”, he explains, of the former public group EDF-GDF. A group born in 1946 with the nationalization of electricity and gas. Then split into two limited companies in 2004 under the effects of liberalisation, although the State remains the main shareholder of EDF (nearly 84% of the shares) and Engie (nearly 24%).

Proof of the general confusion, some users also think that the regulated electricity sales tariffs (TRVE) will disappear on July 1, 2023. At least 40% of people questioned (out of some 2,000 households) by the national mediator of energy believe so, in its 2021 barometer. This is false.

No law currently provides for the short-term disappearance of the TRVE, or more commonly the “blue tariff” of EDF. Since 2010, anyone who abandons this tariff can even return to it without delay, according to the principle of complete reversibility. “The two regulated tariffs, gas and electricity, do not have the same political charge, nor the same representation with the general public”, considers Nicolas Goldberg, consultant with the consulting firm Colombus Consulting. In 2018, Anode also tried to challenge the blue tariff, this time with the reinforcement… of Engie. But the Council of State had then authorized the “obstructing” of competition, considering electricity as “a non-substitutable energy” and “a basic necessity”, unlike gas.

“A distinction is necessary, for gas, the notion of attenuated public service should rather be used,” said Jacques Percebois, professor emeritus at the University of Montpellier, director of the Center for Research in Energy Economics and Law. First reason: electricity concerns 33.8 million households, 64% of which are still at the regulated tariff. That is three times more households in total than the gas network, which often has no connection in rural areas. In addition to the fact that gas contributes more to global warming, another difference, and not the least: low-carbon electricity is produced on national soil, mainly thanks to nuclear power. Unlike molecules imported from Norway, Russia, Algeria, the Netherlands or Nigeria.