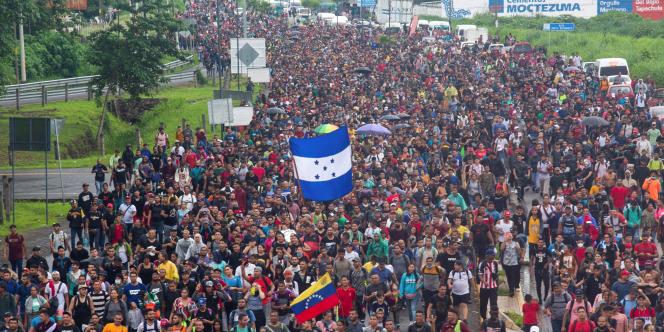 A caravan of several thousand migrants set off on Monday, June 6, in southern Mexico with the intention of reaching the United States, on the first day of the Summit of the Americas, which is being held in Los Angeles and must address migration issues.

The group, made up of men, women and children from Central America and Venezuela, traveled from Tapachula, near the border with Guatemala, towards the border with the United States, at more than 3,000 kilometers to the north, noted a photographer and a videographer from Agence France-Presse. No official figures on their number were available.

“Migrants are not criminals, they are international workers,” proclaimed a banner carried by members of the caravan. “Freedom, freedom,” “We want visas,” shouted marchers, some of whom sang the Venezuelan anthem.

“Without sacrifice, there is no victory”

“We say to the heads of state of the countries meeting today at the Summit of the Americas that migrant women and children, that migrant families, are not currencies” for “ideological and political interests “, told AFP Luis Garcia, of the NGO Center for Human Dignity (Centro de dignificacion humana), which accompanies the migrants.

Omar Herrera, a Venezuelan, said he left his country and his job at a university because his salary “didn’t allow [him] to live”: “Without sacrifice, there is no victory”, he also claimed.

On the occasion of the Summit of the Americas, the President of the United States, Joe Biden, hopes to conclude a regional cooperation agreement on immigration, an explosive subject which has earned him violent criticism from the Republican opposition.

One of its main partners in Latin America, Mexican President Andres Manuel Lopez Obrador, confirmed on Monday that he would not go to the summit, because the United States did not invite Cuba, Nicaragua and Venezuela. for violations of democracy.

Migrant caravans passing through Mexico have been a source of tension with the United States since the days of US President Donald Trump (2017-2021).

The number of people seeking to enter the United States after fleeing poverty and violence in Central America and Haiti has been rising steadily for months.