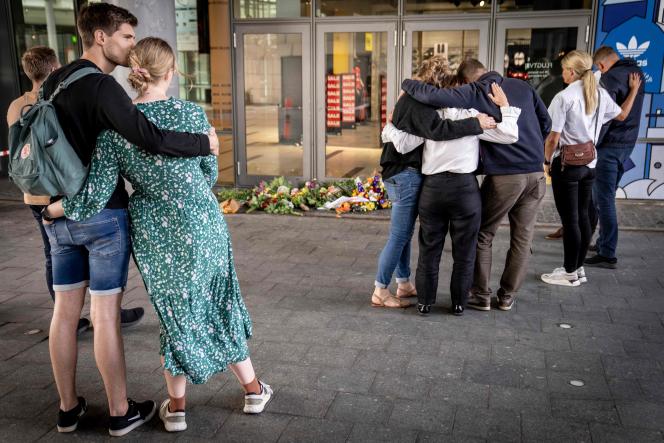 After a killing in a shopping center in Copenhagen, which left three dead and around thirty injured on Sunday, the suspect was taken into custody in a psychiatric unit on Monday, July 4.

Arrested shortly after the shooting, the 22-year-old was brought before a court judge in the Danish capital, who served him with charges for three murders, including that of two teenagers, and seven attempted murders.

After a two-hour hearing, his pre-trial detention was ordered for twenty-four renewable days in a “closed psychiatric unit”. At the request of the prosecutor and with the agreement of the defence, the decision is accompanied by an examination of his mental state.

A tribute to the victims

Police announced Monday morning that the suspect, described as an “ethnic” Dane, was known to have a psychiatric history. According to the national radio and television DR, citing several anonymous sources, the young man tried to join a psychological help line shortly before the facts, which the authorities did not want to confirm.

The attack, carried out mainly with a rifle, killed three people and injured thirty, including four seriously, in a large shopping center Field’s, located between the center of Copenhagen and the airport of the capital. The drama came to shake up a festive weekend in the Scandinavian country, between the jubilation of the passage of the Tour de France and the return of the giant Roskilde music festival after two years of cancellations due to Covid-19.

“I believe that we have rarely experienced such a violent contrast as that of yesterday,” acknowledged Danish Prime Minister Mette Frederiksen, who came to pay tribute to the victims at the scene on Monday at noon. “Naturally, very justified discussions will emerge (…) in connection with the weapons used, in connection with psychiatry (…), but today I find that we must pay tribute to the victims, show our sympathy, our help and our support, and support everyone who has been affected,” she added in front of the cameras.

A ceremony in memory of the victims will be organized Tuesday evening at 8 p.m., near the shopping center, announced on Twitter the mayor of Copenhagen, Sophie H. Andersen.

Videos of the suspect posted on social media

The identities of the three people killed – a 47-year-old man, a 17-year-old boy and a 17-year-old girl – as well as the injured, of different ages and genders, suggest “these are randomly selected victims” , explained the director of the investigation, Soren Thomassen. “There is nothing in what we found to indicate that it was a terrorist act,” he said, and the shooter acted alone, he said.

Police confirmed Monday morning the authenticity of videos of the suspect circulating since Sunday evening on social networks. The young man – whose identity is known but not revealed – appears there posing with weapons, miming suicide gestures with a rifle and a pistol.

He also mentions a treatment with a powerful drug prescribed in psychiatry “that does not work”. The suspect’s YouTube and Instagram accounts were deactivated overnight, but the videos, posted Friday according to Danish media, are still circulating on other accounts.

The police believe it is too early to comment on the motive for the attack, but that it seems to have been prepared. The arrest took place without difficulty, Sunday around 5:50 p.m., near the shopping center, about a quarter of an hour after the first reports of gunshots, according to the police.

Four people were shot and are still “in serious condition”. They are two Danes aged 19 and 40 and two Swedes, a 50-year-old man and a 16-year-old girl. According to the police, twenty-three people were also slightly injured during the panic caused by the shooting in the shopping center.

The latter was very popular due to a concert, with 13,500 spectators, of the British star Harry Styles scheduled in a large venue nearby, the Royal Arena. The show was canceled at the last minute. “I am heartbroken with the people of Copenhagen. I love this city. The people there are so warm and full of love,” the singer tweeted.